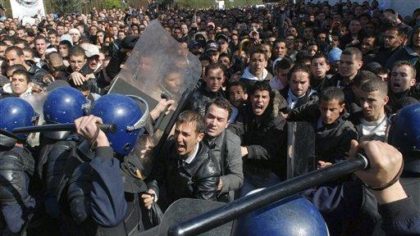 Sensing the social implosion is imminent after simmering for a while, the Algerian authorities resorted to scare tactics in a bid to continue clinging to power, hoping desperately to maintain the status quo.
The Algerian state TV has broadcast lately special reports showing horrible, painful and shocking images of the bloody civil war in Algeria. In 1991, the Islamic Salvation Front Party (FIS) was on the verge of winning Algeria’s parliamentary elections and defeating the country’s ruling National Liberation Front (FLN).
But after the first round of polls, the government cancelled the elections and banned the FIS. Shortly thereafter, a civil war broke out pitting the government against Islamist rebel groups. About 200,000 Algerians lost their lives in what becomes known as the “Black Decade”.
The Algerian TV refocus on these tragic events raises the suspicion of opposition parties and civil society groups. Contrary to the expectations of the Algerian authorities, the broadcasting of the civil war reports sparked a furious backlash in social media and fueled hot debates in the country wherein power struggle is raging between presidency inner circles and military intelligence apparatus.
Appalled and outraged by the goals of such as a move, most Algerians say this initiative is a blatant violation of the Charter of peace and national reconciliation.
In their social media chats, Algerians slammed their rulers, saying they seek to terrorize people. “The authorities are threatening us. They want to silence us or else”, writes an Internet user, while others denounce a psychological warfare waged against Algerian people.
According to some local press reports, the Algerian authorities used the scare tactics to compel Algerian population to swallow their controversial austerity program, avoid protests and uprising as social tension is mounting to dangerous levels. It seems that the social, economic and political crisis has reached its climax in this North African country, member of the OPEC cartel.
The explosive situation in Algeria triggers regional and international concern over the future and stability of the country which has dropped several projects due to lack of necessary funds.
The country’s dinar currency has also plummeted against the U.S. dollar and the Euro, hitting the bottom due to the 50 pc fall in the oil revenues.
Algerian people have already started feeling the impact of the depreciation of the dinar, while foreign products are increasingly becoming out of reach and rare commodities.
In its latest report, International Crisis Group had sounded the alarm bell over the growing popular resentment against Algerian authorities which have so far managed this burgeoning discontent with a stick-and-carrot policy.
Several western countries warn their citizens against travel to Algeria due to high risks of terrorist attacks and kidnappings in this country which has long been run by an opaque military and political group wherein decisions are reached behind the scenes through a system of consensus. That consensus is no longer working in this 21st century which requires transparent, democratic institutions and good governance.