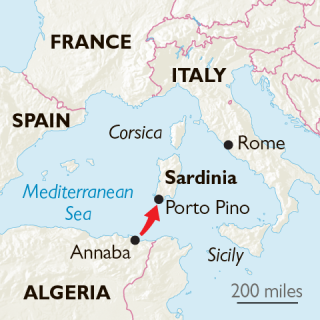 Fears in Italy over Increasing Arrivals of Migrants from Algeria

The Governor of the Italian Island of Sardinia has raised the alarm requesting help from Rome to curb the rising influx of illegal embarcations from Algeria, which has become a new Mediterranean illegal migration route to Europe.

About 800 people have made the crossing from Algeria this year, landing on beaches in Sardinia in small wooden boats after 24 hours at sea. In one four-day period this summer, 11 boats arrived.

The increase in landings from Algeria was ascribed to the tightening of control by the Libyan coast guard following an agreement with Italian authorities leading to a dramatic drop of 81% of arrivals from Libya compared to the same period last year.

The crackdown on illegal migration networks in Libya has pushed them to seek closer and safer routes in the Western Mediterranean such as Algeria. With the right weather conditions, Algerians can reach the southern coast of Sardinia in an overnight crossing.

Yet the numbers of landings of illegal migrants from Algeria are still tiny compared to the 100,000 migrants who have reached Italy from Libya this year, and the 181,000 who successfully made the crossing last year.

Besides Algeria, Morocco is also emerging as an alternative to the Libyan route. Attempts at storming the borders of the two Spanish exclaves in Morocco, Ceuta and Melilla, and embarkations on board dinghies are making the headlines in Europe with the UN warning that Spain is on course to overtake Greece in terms of illegal migrant arrivals.