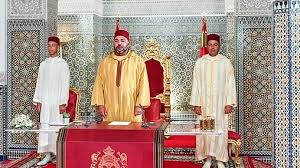 Morocco’s pivot to Africa is the fruit of a decades-long strategy based on a win-win approach and the values of co-development and solidarity, said King Mohammed VI

In a speech on the occasion of the 64th anniversary of the Revolution of the King and People, the King highlighted the salient features of Morocco’s African policy and the tireless efforts he has led since taking the throne in 1999.

These efforts culminated with a triumphal return to the African Union and an application to join the Economic Commission of West African States (ECOWAS), said the King, stressing that Morocco’s commitment to Africa is the “result of profound, realistic reflection which is itself governed by a long-term, strategic vision and a gradual, consensual approach.”

In this regards, the Monarch explained that Morocco’s African Policy takes shape on the ground through “flagship development projects launched, like the Nigeria-Morocco Atlantic gas pipeline project, the construction of fertilizer plants in Ethiopia and Nigeria as well as human development projects designed to improve the living conditions of African citizens, such as the creation of healthcare facilities, vocational training institutions and fishermen’s villages.”

The King also deplored the shortsightedness of the critics of Morocco’s African Policy who claim that it is carried out to the detriment of Moroccans, saying that the focus on Africa will bring added value to the national economy and reinforce Morocco’s stance on the Sahara.

In this connection, the Monarch recalled the challenges that Morocco has managed in 2016 to thwart schemes designed to undermine its sovereignty over the Sahara and that 2017 has been the year of clarity and of a return to the standards and principles for a settlement of the artificial dispute over Morocco’s territorial integrity.

“This was confirmed by the UN Secretary-General’s report as well as the Security Council resolution adopted last April, be it in terms of commitment to the frame of reference for a settlement, the appreciation of the autonomy proposal as a negotiating framework, or the determination of the legal and political responsibilities of the real party concerned in this regional dispute,” he recalled.