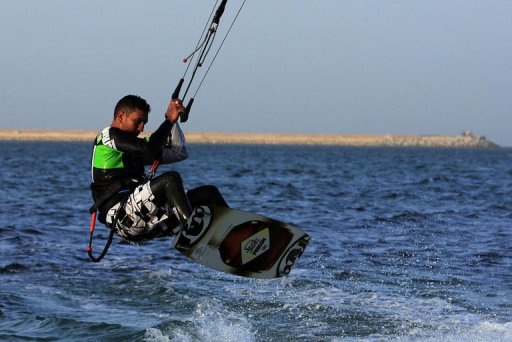 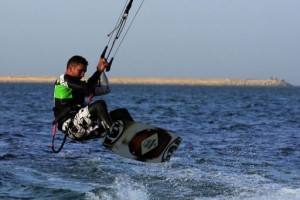 Libyan youth living around the coastal areas are turning towards kitesurfing to occupy their leisure time. The sport is gaining huge popularity. Water sports in Libya, a Mediterranean country boasting a 1,770-kilometre coastline (1,106 miles) and almost 365 days of sunshine, were woefully underdeveloped during the Gaddafi regime, although there was a sailing federation in place. The importation of the kite used to be a high challenge in that era because of the security attention it amassed.
Jalal Elwalid became Libya’s first certified kitesurfing instructor this year. He has decided to open a school to teach the sports after his certification which has at present registered more than 25 people since it opened its doors 10 months ago. Kitesurfing, a hybrid sport mixing the techniques of kiting and wakeboarding, is considered the world’s fastest growing extreme sport and it is quickly gaining ground in Libya where it draws foreigners and locals alike.
Some Libyans use to sneak to the isolated island of Farwa, near Tunisia, to practice the sport because of its suitability as a hideout away from the security personnel during the Gaddafi regime. Things have changed now and the Neon crescents which twirls over the sheltered waters of Tripoli’s main port now serves as one of the hangouts of Libya’s growing kitesurfing community. The port and the suburb of Garabuli near Tripoli are their mid-week go to spots and Farwa has become the favorite weekend destination.
According to Khaled Etaleb, a heart surgeon who learned kiteboarding in neighboring Tunisia due to the lack of infrastructures in Libya said that they now have the chance to go anywhere they want.
Kitesurfers are hoping to attract commercial deals to subsidize the acquisition of kits for the sport.