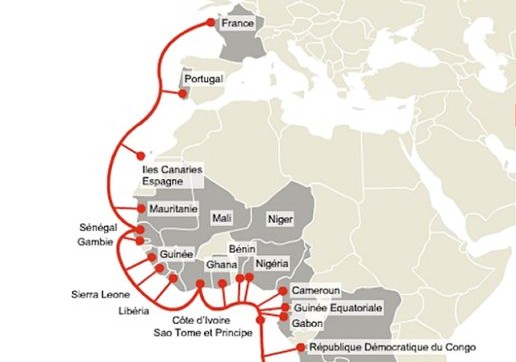 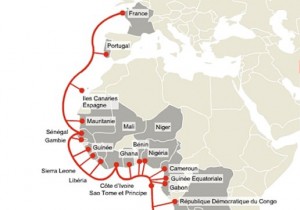 The first phase of the submarine cable ACE (Africa Coast to Europe) which connects coastal countries has been launched by France Telecom-Orange and other members of the ACE consortium. The cable provides access to high-speed Internet to beneficiaries and brings additional capacity to existing international networks. Mauritania with twelve other countries will be benefiting from the project which runs along the coast of West Africa, covering a distance of almost 12,000 kilometers.
The launching of ACE will give Mauritania its first time direct connection to a submarine cable, enabling optimal access to international broadband network. Based on this new network operators in these countries can now develop a range of innovative broadband services, essential to economic and social development of these countries. The project will also boost the country’s ability to participate in large international groups in Africa and significantly improve the connectivity of their African sites and their global networks by enabling the development of value added services in the areas of Unified Communications, of IT and customer relationship.
The cables will ease communication and also provide alternatives which secure the transmission of communications for countries already served by cable SAT3-WASC-SAFE within Africa Europe and Asia. The consortium enjoys the best technology being used in the field of submarine cables: the wavelength multiplexing (WDM), which permits the increment of the capacity without diving underwater. The total capacity will amount to 5.12 Tbps with the new technology that supports 40 Gbps ultra-high speed networks.
Cable construction represents an investment of about 700 million U.S. dollars for the consortium of which about 250 million are supported by the Group and its subsidiaries and the system will offer access to the internet at a low price with a very high speed.