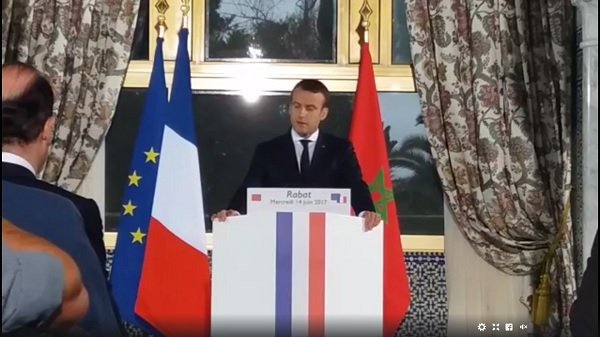 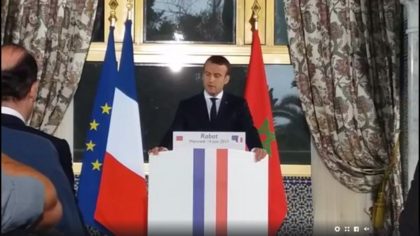 Newly elected French President Emmanuel Macron started a friendship and working visit to Morocco on June 14 in response to an invitation from King Mohammed VI.

Macron landed in Rabat airport accompanied by his spouse Brigitte. He afterwards held a press conference following talks with King Mohammed VI on a range of issues of mutual concern, notably bilateral cooperation, the situation in the Rif region, joint efforts in Africa and the latest developments in the Gulf.

Morocco is “a friendly country and a strategic partner,” Macron told reporters, saying that his visit has a special character as it shows France’s “willingness to bring support to the ambitious reforms led by the King, especially in terms of the modernization of institutions and economic development.”

He also expressed France’s interest in reinforcing cooperation with Morocco to address “territorial disparities and the promotion of the Advanced Regionalization Plan.”

Macron added that France and Morocco are working together to promote entrepreneurship as well as cultural and educational cooperation with a view to promote the role of the civil society.

The French President commended Morocco’s “increasing role” and “active diplomacy in Africa,” noting that Morocco and France are both concerned with maintaining stability in the Sahel and addressing development challenges on the continent.

President Macron who underlined that France is a stabilizing actor in the Sahel said that his country aims at boosting growth in Africa through “concrete actions.”

On the Qatar-Gulf rift, Macron said that France and Morocco are both interested in defusing tension and avoiding escalation. In this regards, he said that he will be receiving the Emir of Qatar next week in Paris to “clarify positions”.

Concerning the latest development in the Rif, Macron said that the King is closely following the development in the region and considers protests “legitimate”. King Mohammed VI is looking forward to meeting the demands of protesters to “appease” tension, he said.

Macron’s visit to Morocco is his first trip to the Maghreb region after taking office. The visit mirrors the excellent political, economic, and cultural ties binding the two countries and evidences the continuity marking French-Moroccan partnership.

Macron’s visit to Morocco, his first to the region, one month after his election to France’s presidency “reflects the depth of bilateral relations based on a strong partnership, and the common will to consolidate the multidimensional links between the two countries,” said the Ministry of the Royal House, Protocol and Chancellery in a statement announcing the visit.

In his congratulations message to Emmanuel Macron on his election, Mohammed VI highlighted the longstanding ties of friendship existing between his country and France as a “strategic choice” and voiced confidence that under Macron’s presidency French-Moroccan partnership will gain “in depth and intensity”.

The visit also materializes some of the electoral promises made by Macron who ambitions to further foster his country’s relations with the Maghreb and with Africa. During his campaign, Macron had said that Morocco was on top of the countries that he would visit as soon as he wins elections and his diplomatic adviser Aurélien Lechevallier had pointed out that Macron considers Morocco a key player in his Mediterranean and Africa strategy.

In view of Morocco’s activism, its growing economic, political and security presence in the Sahel and more generally in Francophone Africa, particularly since it returned to the African Union, and in view of France’s resolve to boost its economic and security cooperation with Africa, Macron’s visit is taking place at the right time to bolster the two countries’ excellent and strategic partnership and to boost a triangular cooperation with the African continent.