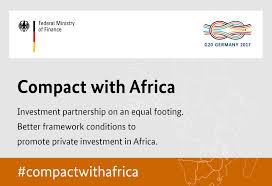 Morocco, Tunisia to Benefit from G20 Compact with Africa Initiative

Morocco and Tunisia are listed in a group of five African countries that have first pledged reforms under the Compact with Africa Initiative, a Germany’s flagship G20-Africa Partnership project aiming to improve economic conditions across the continent.
The three other countries having registered their interest with the G20 are Côte d’Ivoire, Rwanda and Senegal. More countries will likely follow suit.

The initiative was launched following a meeting between Merkel and African leaders at the G20-Africa Partnership, held as part of Germany’s presidency of the G20 powerful economies, which will organize its annual summit in Hamburg in early July.

The Compact with Africa aims to increase sustainable private sector investment, as well as improving infrastructure and tackling unemployment. In order to achieve this, a number of African countries are partnering with the G20, the World Bank, the International Monetary Fund and the African Development Bank to negotiate a specific action plan for each state.

Through this initiative, Germany looks forward to convincing the world’s 20 powerful economies to earmark $130 billion a year to expand African infrastructure, an amount that is not likely to create substantive change.

Labelled as the “Marshall Plan” for Africa or the “Merkel Plan,” the Compact with Africa looks forward to creating a departure from ordinary development aid, marking an end to the random approach of distributing funds, which has proved not to have worked.

The Initiative is geared to implementing reforms, which would increase their investment potential, while their international partners would assist with economic issues, offer technical expertise and help lure investors to the region

Germany has also unveiled a “reform partnerships” with Tunisia, Côte d’Ivoire and Ghana, part of a planned investment of up to €300 million targeting notably the development of renewable energy and the reform of the financial and banking sectors.
Africa receives $50 billion in direct foreign investment annually, compared to $120 billion for Asia. Half of that goes to just five countries: Angola, Egypt, Mozambique, Ghana and Morocco.
German private investment in the 55 African countries is still low – they accounted for just 3 percent of German foreign investment in the last decade. The UK, China, France and the United States have far more substantial investments in the continent.