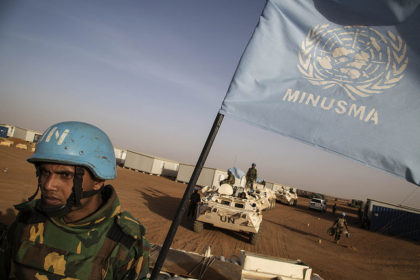 The US has expressed reservations over the French move to garner support at the UN Security council for the adoption of a resolution mandating a force by West African states to combat terrorism and trafficking in the Sahel.

The US voiced its concerns regarding the UN financial backing for the Sahel force after France has asked the UN Security Council to authorize the deployment by five African countries- Burkina Faso, Chad, Mali, Mauritania and Niger (known as G5 countries)– of a special counterterrorism force of 5,000 troops for the Sahel region.

France circulated this week a Security Council draft resolution that would authorize the military action by the five African countries, a move that is also backed by the African Union. The Presidents of the G5 agreed last February to set up the joint force comprising military, civilian and police personnel, with headquarters in Mali.

The US, which pushes to curb its funding to UN peacekeeping forces, sees a UN mandate through a UN Security resolution as unnecessary. After closed-door negotiations, diplomats told the press that the US would prefer the council give its blessing in a statement instead of a resolution and encourage bilateral support for the West African force.

A US official told Reuters that his country supports the force “in principle as a potentially important example of African efforts to fight extremism on the continent,” but noted that a UN resolution was not the only way to provide political support.

The US official added that a UN authorization was not needed because the force is already approved by the countries where it would deploy as is the case with the joint task force in Lake Chad Basin.

The France-proposed draft resolution stresses the urgent need of countering the surge of terrorism in the Sahel and warns of the challenges posed by trans-border crime organizations in the region, “including arms and drug trafficking, the smuggling of migrants, trafficking in persons, and its increasing links, in some cases, with terrorism.”

Under the same text, the Mali-based force will be authorized to deploy for a year a mandate to “combat terrorism, drug trafficking and trafficking in persons.”

The draft resolution also stresses the need for restoring state authority and helping the return of displaced people and refugees, and facilitate the delivery of humanitarian aid.

The US official, who deemed the mandate of the force “too broad, lacking precision,” said it would set a “dangerous precedent by providing authorization for lethal force for a broad spectrum of activities including operations to ‘eradicate’ undefined criminal networks.”

The European Union has already promised a €50 million support, with diplomacy chief Federica Mogherini citing stability of the Sahel region as “crucial not only for Africa but also for Europe.”

The Sahel has become a breeding ground for several terrorist groups taking advantage of vast swathes of deserts and porous borders to engage in various terrorist, trafficking and criminal activities.

Radicalization and human trafficking are major threats in the impoverished region, where Al Qaeda and associated groups have a significant presence, while the Islamic State militant group (ISIS) also appears to be staking a claim in the volatile region.