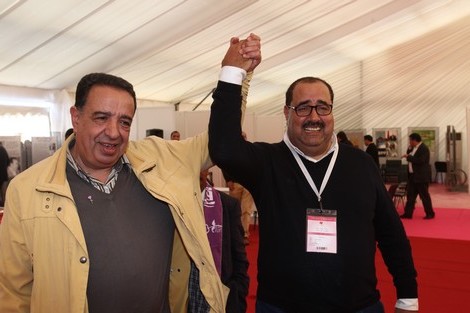 Driss Lachgar’s Election Leader of the USFP, the End of an Era 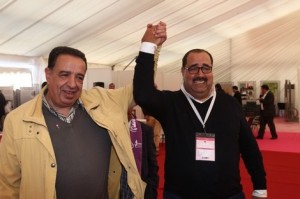 Driss Lachgar, a career lawyer, a Parliamentarian and a former Minister, was elected Sunday First Secretary of the Moroccan Socialist Union of Popular Forces (USFP), at the end of the second round, in replacement of Abdelouahed Radi.
Lachgar was elected with an overwhelming majority as he won 848 votes against 650 for his contender Ahmed Zaidi.
This election marks the end of an era for the “Party of the Rose” when the leader was chosen from the founders and the charismatic historical figures of the party who struggled to liberate the country from French colonization in the forties and early fifties, before a split with the Istiqlal Party and later on with the National Union of Popular Forces (UNFP), and who fiercely opposed the late King Hassan II and his non-democratic regime.
This is the first time in the history of the party actually that an activist who was still an infant when Morocco recovered its independence and still a teenager when the tug of war between the monarchy and leftist parties was at its height, is elected to lead the USFP, founded in 1974, after it split with the UNFP in 1972.
Lachgar’s task will not be easy as he needs to make the USFP recover its past glories, when it was the strongest party on the Moroccan political landscape before its popularity eroded after his disappointing participation in the government since 1998 for twelve successive years.
Immediately after the announcement of the election results, Lachgar reached out to all the party members, including his rivals, urging them to join efforts to breathe new life into the USFP. “The USFP needs all its components and all its skills,” he told the media, assuring that the party will not be run by one single person but that the management will be collegial.
He also asserted that his party will remain in the opposition. But some analysts comment that with Lachgar, sometimes described as opportunistic and manipulative, everything is possible, underscoring that after his failure in the 2007 legislative elections, he tried hard to make the headlines and to befriend any party that may propel him again to the forefront.
A veteran of the party, Mohammed Lahbabi, said in a recent interview with Al Massae daily that Lachgar had manoeuvered hard to become, with the help of “his friends” within the PAM (Authenticity and Modernity Party), member of the government, where he held the portfolio of relations with the Parliament from January 2010 to January 2012.
Some others recall that he was not completely opposed to his party’s participation in the current coalition government that is led by the islamist Party for Justice and Development (PJD), although the two parties’ ideologies are utterly different. Other commentators do not rule out that Lachgar will team up with Hamid Chabat, the populist leader of the Istiqlal Party, either to participate in the government in the reshuffle Chabat has been calling for since he took the reins of his party last September or even to overthrow the PJD-led cabinet to form a governmental coalition with other current opposition parties, including the PAM and the RNI (National Rally of independents).
Driss Lachgar, born on September 25, 1954 in Rabat is a career lawyer.
In 1970, he joined the UNFP. After the split with the UNFP, he sided with the USFP and was very active in the Socialist Youth section. He was also very active in the leftist National Union of Students of Morocco (UNEM) from 1972 to 1976, along with Radi and unionist Abderrazak Afilal.
He first entered the Parliament during the 1993 legislative elections. He was elected in Rabat under the banner of the USFP. He was re-elected in the same constituency in the parliamentary elections in 1997 and 2002, and became President of the Socialist Group. But in 2007, he lost his parliamentary seat.
Lachgar who was elected member of the USFP political bureau during the party’s 6th congress in 2001, ran for the local elections in 2009 and won a seat as councillor for the Rabat-Souissi district.
During the 2011 legislative elections, he recovered his parliamentary seat and was propelled to the USFP leadership this December 16 during the party’s 9th national congress.
With Driss Lachgar, the USFP has lost the charisma embodied by its previous leaders Abderrahim Bouabid or Abderrahmane Youssoufi but  populism-inspired political leaders, like Chabat or Abdelilah Benkirane, are in the wave of the era.