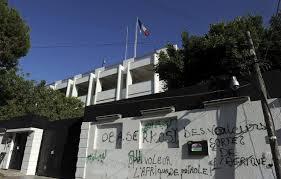 Libya: France not in haste to reopen embassy

France Friday indicated that it was not planning to reopen its Tripoli embassy shortly, citing lack of security conditions, Middle East Monitor (MEMO) reports.
The French Foreign Ministry’s spokesperson Romain Nadal said at a daily news briefing that Paris would not repost its ambassador in Tripoli soon.
“Our embassy for Libya is currently located in Tunis. We would like that it reopens in Tripoli as soon as security conditions are right,” he told media.
Nadal said that the French envoy has been making regular visits to Tripoli.
Nadal’s remarks debunked the comments made Tuesday in Paris by Libyan UN-backed Prime Minister Faiez Serraj who hinted at the resumption of affairs at the French embassy in Tripoli shortly.
The Libyan leader held talks with French President Emmanuel Macron this week.
The French embassy in Tripoli had been targeted by a car bomb attack in April 2013. France, like several other countries, closed its embassy in 2014 as the security situation was deteriorating in the Libyan capital with militias’ feuds over Tripoli’s control increasing.
Paris supports Serraj’s Presidential Council and French Special Forces are present in the North Africa country.
Two days after the Macron-Serraj meeting, the Presidential office issued a release Thursday, saying that Paris continued to support the GNA and wanted a stable and united Libya on the basis of a political agreement between rival factions but made no mention of embassy, MEMO reports.
Italy was the first Western country to have reopened its embassy in Libya, early this year.