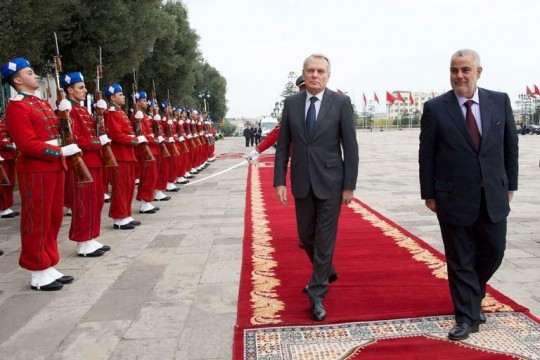 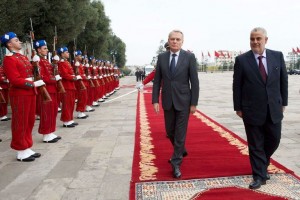 French Prime Minister Jean-Marc Ayrault started Wednesday a two day visit to Morocco, his first to a Maghreban country, to seal the special and unique partnership existing between the two nations.
In this time of crisis, the French official pleaded from the start for the revival of his country’s economic relations with Morocco, where President François Hollande is expected early next year.
Jean-Marc Ayrault’s trip during which a dozen agreements worth nearly €300 million are expected to be signed in the realms of economy, education and research, renewable energy, transport and infrastructure, started his visit by talks with King Mohammed V that covered, in addition to bilateral relations, the situation in the Sahel, in Syria as well as the Middle East conflict.
The two sides voiced deep concern over the deteriorating situation in the Sahel, especially Mali, and called for dialogue between all Malian political forces and for encouraging negotiations with non-terrorist groups in the African country.
The King and his interlocutor also agreed on the need to back the Syrian opposition coalition as the legitimate representative of the Syrian people, to help Syria in its expected political transition and to upgrade humanitarian assistance to the Syrian people and especially to the displaced and refugees.
They on the other hand reiterated the need to find a new formula to put the Israeli-Palestinian negotiations back on track, in order to reach a final settlement and allow the establishment of a viable Palestinian state.
After the meeting, Jean-Marc Ayrault accompanied the King to inaugurate the first tramway line in metropolis Casablanca that was achieved in cooperation with France.
The French Premier and his Moroccan peer, Abdelilah Benkirane, chaired the 11th high level French-Moroccan meeting that was crowned by the signing of 13 cooperation agreements, including four loan accords worth €280 million. The loans, extended by the French Development Agency (AFD), will finance a number of development projects in Morocco in the sectors of urban transport, ports infrastructure, promotion of techno-poles and integrated industrial platforms and vocational training.
Jean-Marc Ayrault insisted that these agreements are a “win-win” deal for Morocco and France, especially in terms of economic returns and employment. During his talks with Moroccan officials as well as in the statements he made to the media, the French official renewed his country’s backing to the reform and modernization process underway in Morocco and his cabinet’s determination to give a new momentum to the two countries’ exceptional partnership.
France, one of Morocco’s major trade partners, supplies 14 percent of the North African country’s imports while Morocco’s exports to France amount to 20 percent of its overall exports.