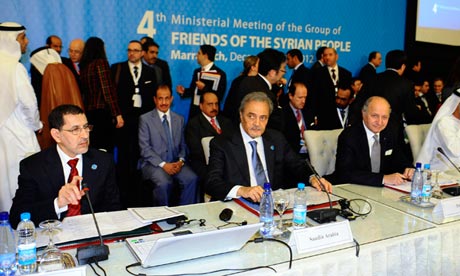 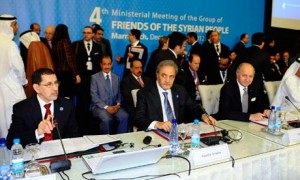 The fourth ministerial meeting of the international “Friends of Syria” group meeting in Marrakech on December 12 has recognized the newly formed Syrian opposition coalition as “the legitimate representative of the Syrian people”.
The recognition is announced in the declaration endorsed Wednesday by the over 100 delegations that attended the meeting, including from the US, Europe, the Middle east and the Gulf.
The declaration also called on President Assad to “stand aside” in order to allow “a sustainable political transition” process.
The meeting discussed a common strategy to ensure a political transition in Syria at the collapse of President Assad’s government, which is deemed nearing as rebel forces have scored a number of victories against the government in recent weeks and have intensified a push towards Damascus.
“Recognizing the national coalition of the Syrian revolution and the Syrian opposition forces as well as mechanisms to ensure a democratic transition in Syria, (…) the participants reaffirmed their support for the full implementation of Security Council resolutions 2040 and 2043 and reiterated that Bachar Al-Assad has lost all legitimacy and should stand aside to enable the launch of a sustainable political transition process,’ says the document adopted by the Marrakesh meeting.
The meeting called on the Syrian regime to “immediately cease its attacks and withdraw all its troops from urban areas as a first step towards a definitive halt to violence.”  It also condemned the” disproportionate and indiscriminate use of force by the Syrian regime, including the use of heavy weapons, missiles and air strikes,” while recognizing “the Syrian people’s legitimate need to defend themselves against Al-Assad regime’s violent and brutal force”.
The participants who discussed the impact of the conflict on regional security, underscored in the declaration that “the ongoing crisis is a threat to stability, security and economic well-being of neighboring countries and of the whole region.” They voiced firm support for the efforts meant to prevent the growing threat, including the NATO decision to strengthen Turkey’s defense and the allies’ intention to deploy the Patriot air defense system in Turkey.”
The “Friends of Syria” group which surveyed the efforts needed to provide humanitarian aid to Syrian refugees, whose situation is worsening as winter sets in, deplored the rising human cost of the conflict, which has taken more than 40,000 lives over the last two years.
The conflict has equally forced tens of thousands out of their homes. Besides some two million displaced Syrians inside the country, half a million others fled across the border and sought refuge in neighboring Turkey and Jordan.
Morocco set up a medical field hospital at the Zaatari camp in Jordan that has aided more than 40,000 Syrian refugees.
The Marrakesh meeting also called for creating the conditions necessary for a “sustainable and inclusive political solution” to the Syrian crisis.
Participants on the other hand urged the countries (including Russia and Iran) supporting the Syrian regime to reconsider their position and called for an effective implementation of the sanctions decreed against Al-Assad’s regime to prevent it from receiving support and resources that allow it to commit acts of violence against the Syrian people.
The leader of the coalition, Moaz al-Khateeb, who took the floor before the conference, said that the coalition needed not just political backing, but also financial support, particularly the setting up of a reconstruction fund. He also said that members of the Syrian government should be charged in the International Criminal Court.
The King of Morocco had addressed the Marrakesh conference a message urging the Security Council member states to shoulder their responsibilities in preserving peace and security in the Middle East country and to adopt a unified and strong position in order to spare the Syrian people more tragedies and sufferings. Mohammed VI also called for a steady support to the transition process in Syria, with a view to establish a democratic regime, gathering different trends and components of the Syrian people.
On the eve of the Marrakesh conference, President Barack Obama, announced that his government would be recognising the coalition as Syria’s “legitimate representative” and Under Secretary of state William Burns, who represented Washington at the conference invited the coalition members to visit the United States.
The fifth ministerial meeting of the international “Friends of Syria” group will be held in Italy, announced Moroccan Foreign Minister Saad El Otmani.
The three previous meetings were held earlier this year successively in Tunis (Februray), Istanbul (April) and Paris (July).