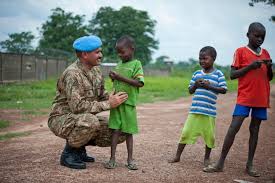 Another soldier of the Moroccan contingent of the United Nations peacekeeping force in the Central African Republic was fatally wounded during an exchange of fire this Saturday (May 13) with an armed group that attacked a Moroccan checkpoint in downtown Bangassou.
An armed group opened fire on civilians overnight killing an undisclosed number and at least one UN peacekeeper of the Moroccan contingent, who died from gunshot injuries, the UN Multidimensional Integrated Stabilization Mission in the country, known by the French acronym MINUSCA, said in a statement.
The attack came just hours after the UN held a memorial ceremony to honor five peacekeepers, four Cambodians and one Moroccan, killed on May 8 in a nearby village of Yogofongo, in a deadly attack perpetrated by suspected anti-Balaka elements. Ten peacekeepers, 9 Moroccan and a Cambodian, were injured in this attack.
People connected with the anti-Balaka group are also suspected in Saturday’s attack.
“The armed elements continue to systematically and deliberately attack the MINUSCA base with heavy weaponry to impede the peacekeepers from doing their extremely vital task of protecting the civilian population and to divert them from their primary vocation of saving lives,” MINUSCA said.
The Special Representative of the Secretary-General and Head of MINUSCA Parfait Onanga-Anyanga vigorously condemned the attack, adding that “MINUSCA will do everything in its power together with the legitimate Central African authorities to arrest the perpetrators of these horrible acts.”
He said the international community will be “relentless” in apprehending the perpetrators of these crimes and all their commanders, including some instigators who may be sponsoring these attacks from Bangui.
“Our actions will be relentless. The blood of peacekeepers and the blood of innocent Central Africans will not fall in vain in this country,” he added.
The UN Secretary General, Antonio Gueterres, the MINUSCA and the UN Security Council have all strongly condemned the May 8 attack against MINUSCA, saying that such an aggression amounts to “war crime.” They also extended condolences to the families of the victims and expressed solidarity with Morocco and Cambodia.