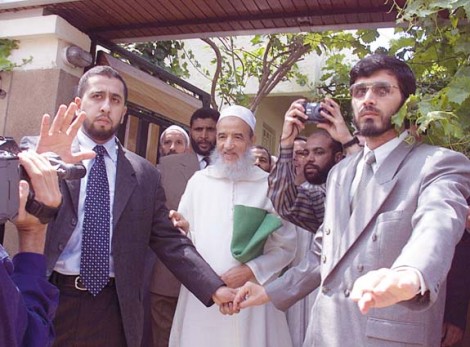 Sheikh Abdesslam Yassine, the founder and spiritual leader of Al Adl Wa Al Ihssane, a Moroccan Islamist association, passed away early Thursday and will be buried Friday after the noon prayers.

Abdessalam Yassine was born in 1928 to a poor peasant family originating from the Souss region in southern Morocco.
He studied in Marrakesh before enrolling in a teacher training school in Rabat wherefrom he graduated in 1947. This teacher and school inspector started his Sufi experience in 1965 when he joined the Zawiya Boutchichia. In this Zawiya, adherents were trying to practice Islam in its mystical dimension, turning away from earthly material things, purifying their inner selves and seeking to get as closer to God as possible through prayers, dhikr (a practice of repeating the names of God) and asceticism.

However, after the death of the head of the Zawiya Boutchichia, Sheikh Abbas El Hadj, Abdessalam Yassine distanced himself from the confraternity and in the early 70s started to politicize his discourse.

In 1973, he set up an association that ended being named “Al Adl wal Ihsane” (Justice & Charity), that was never legally recognized but that was tolerated by Moroccan authorities. Since that time, Yassine had been acting as the charismatic leader for the organisation, and the association members were considering him nearly as a Saint.

As the state failed during these years to fill in the vacuum resented by an impoverished population in matters of social services, Yassine’ association found it easy to indoctrinate many in a largely illiterate population, through its grassroots social welfare organisations and through penetrating universities. However, the association did not succeed to transform Morocco into an Islamist state as it was hoping.

Sheikh Yassine’s controversial open letter to the late King Hassan II in 1974, dubbed   “Al Islam aw Attofan” (Islam or the Deluge) gained him fame but also sent him to prison for three years and a half.

However, the main focus of the association was the cult of the personality of its leader and interpretation of his dreams. Abdessalam Yassine actually started predicting events claiming he saw them in his visions and his followers were spending their time explaining the accuracy and veracity of these dreams, and how these visions were dictating the association’s political strategy and social actions.

The main famous of these visions occurred in 2005, when Abdeslam Yassine predicted that the following year, i.e. 2006, was going to be the year of “Qawma” (the great uprising). Of course nothing happened in Morocco and life followed its normal course but the association members were deeply convinced that their leader’s premonitions would come true. Several of these members started narrating their own dreams and visions that all corroborate those of their guide. In most of these dreams and visions, Abdeslam Yassine is always in the presence of the Prophet, he is surrounded with a heavenly light and a number of angels. As the end of 2006 was nearing, his daughter Nadia, who was then the association’s spokesperson, was still affirming that the year was still having “days, nights, hours, thousands of minutes and seconds and everything is possible, by the divine will, anytime”. 2006 was over and many other years followed, Yassine’s vision never came true.

Yassine who wrote books and essays and who was sometimes virulent in criticizing the monarchy for lack of political reforms had been sent to prison or put under house arrest many times during the reign of King Hassan II. But shortly after he succeeded his father in 1999, King Mohammed VI lifted any restrictions on Sheikh Yassine’s movement. The leader was free and travelled across Morocco until he fell sick few years ago and was bed stricken.

Now that he passed away, a big question is bothering his followers. Who will head the association after his founder? Since he set up the organization, and despite the physical and mental impairment he suffered in recent years, Sheikh Yassine did not designate anyone to replace him and held to his position till the end. And while many of his followers deem his disappearance as an irreplaceable loss, others are more circumspect and believe that another charismatic leader will surely emerge to replace him.

Anyways, the issue of succession triggered, for quite some time before the Sheik’s death, bitter rivalries between two clans. The first is led by Fathallah Arsalan, the association spokesman, and the second is led by Nadia and her controversial husband, Abdellah Chibani, who tried to present himself as the unavoidable heir but who does not seem to enjoy the support of the some 200,000 members of the association. Meanwhile, the young members of the association have been lately raising their voice, expressing disappointment at Sheikh Yassine’s legacy and claiming their right to have a say in the transition era.

Now that the spiritual leader of Al Adl Wa Al Ihssane is gone, may he rest in peace, uncertainty is the key word for the post-Yassine era.