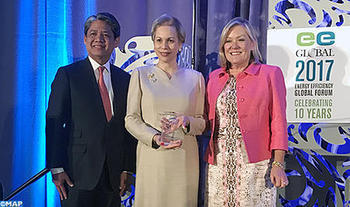 The award was handed to Morocco’s Ambassador to Washington Lalla Joumala during a ceremony in which the forum organizers highlighted the leadership of King Mohammed VI in the field of developing renewable energies and energy efficiency in Morocco and beyond.

Speaking on this occasion, Gil Quiniones, co-president of the Alliance to Save Energy, which organizes the international event lauded the endeavor of King Mohammed VI to achieve energy efficiency in Morocco, while highlighting that the Kingdom stands as a model for developing clean energy. He also recalled that the Kingdom offered a venue for the UN climate Summit (COP22) in Marrakech last November 7-18.

“Thanks to the King’s vision, Morocco is on track to meet the goals set in Paris Agreement in terms of energy efficiency,” said the President of the Alliance to Save Energy.
The Alliance was founded in 1977 to promote energy efficiency to achieve a healthier economy, a cleaner environment and enhanced energy security.
During the event, Morocco’s Ambassador read out an acceptance message sent by King Mohammed VI in which he voiced pride at receiving the Award and commended the actions led by the Alliance to Save Energy.

“This Award confirms the Kingdom of Morocco’s positioning as one of the countries that have managed to make the most of their renewable energy potential by developing solar power plants, wind farms and hydroelectric plants, and by introducing energy efficiency measures in all key sectors of the Moroccan economy,” said the King.

“Energy efficiency plays an important part in enhancing the fundamental rights of citizens, in environmental protection, in the preservation of public health, in curbing dependence of energy and in rationalizing public spending,” underscored the King.

He stressed the need for developing energy infrastructure and shed light on the Kingdom’s experience to adapt to future changes and meet its growing energy needs in a sustainable manner. “The security of energy supply, energy availability, energy efficiency and environmental protection are the bedrock of my country’s energy strategy,” he said.

The Monarch highlighted Morocco’s ambition to bring renewable energy’s share in power generation from 42% in 2020 to 52% in 2030, adding that the Kingdom’s Energy Vision for 2030 assigns particular importance to energy efficiency and rational energy consumption.

Morocco’s renewable energy endeavor does not stop at Moroccan borders, said the King, but has an African dimension as well evidenced in efforts to harmonize the continent’s action for the achievement of low carbon development.