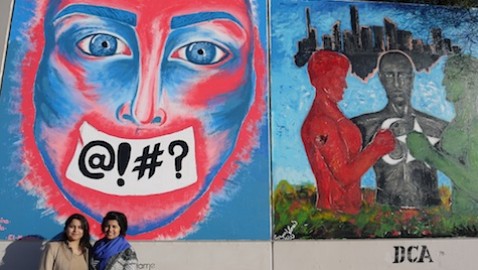 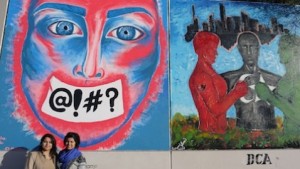 On the walls of Bab Al-Azizya, 34 murals have been unveiled by activists urging for women empowerment to attract more attention on their plight. The event which was part of ceremony called ‘Flame of Our Capital’ united local and international civil societies together with representatives of the British Government, which provided funding for the project.
The paintings are to transmit messages seeking for equal opportunities between both sexes. “These walls represented the oppression of the former regime, and we wanted to replace the bad feelings with positive messages about the revolution and its potential for Libya”, says project organizer Munib Al-Asabee, explaining the reasoning why the location was chosen for the Flame of Our Capital’s. Libya’s population is dominated by women.
If the paintings were destined to pass on a message to the government but they have also made their way through to the Guinness Book of Records as the longest murals in the world stretching for 500 meters.
Among the artists who participated in the paintings are two sisters bred and raised in Libyan who explained their painting of a woman with a tape on her mouth and eyes wide open as a woman having “many things on her mind but she either doesn’t know how to express them, or she’s too afraid or not allowed, hence the tape on her mouth. She is painted in warm and cold colors, representing her mixed feelings.”
Most of the artists who participated in the exercise were women but Anass Mohammed who was part of the male participants said there is not much equality in the country between the sexes as depicted in his painting of unequal weights on a scale.
Danish Church Aid, a non-religious charity and an international NGO coordinated the event.

North Africa Post's news desk is composed of journalists and editors, who are constantly working to provide new and accurate stories to NAP readers.
NEWER POSTAlgeria: Theatre Being Boosted At Amazighe Festival
OLDER POSTFIFM : And the winner is…The Middle East…