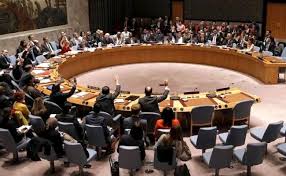 The UN Security Council Tuesday asked the Polisario separatist front to pull out immediately its forces from the Guerguarat buffer zone, in the southernmost tip of the Sahara, after it ignored another call by the UN Chief earlier this month, le360.ma portal reports citing a UN source.
“There was near-unanimity at the Security Council to demand the immediate and unconditional withdrawal of Polisario forces from the Guerguarat area,” the source said.
The fifteen members of the Security Council, which were holding in-camera consultations on the Sahara issue, have largely stressed the need for the Polisario to respond to the UN Secretary-General Antonio Guterres’s call for immediate and unconditional withdrawal of the Guerguerat buffer zone, the source added.
The UN Chief in February called on Morocco and the separatist movement to pull out from the demilitarized buffer strip. King Mohammed VI, in his quality as supreme commander of the Royal armed forces, ordered the unilateral withdrawal of Moroccan troops from Guerguarat, but the Polisario scorned the call.
Antonio Guterres earlier this month reiterated his call on the Polisario to immediately withdraw from the buffer strip.
Guterres, in his report to the UN Security Council members on the Sahara, expressed deep concern regarding the presence of Polisario militiamen in the buffer strip, warning that the situation may degenerate into the collapse of the cease-fire agreement signed in 1991.
He added that the violations of the Polisario, which maintains forces in the area after the withdrawal of Morocco, poses “serious danger” to regional security and stability.
Tension started building up in the Guerguarat region last August when Morocco launched an anti-smuggling operation that has a police character to clear the southernmost tip of the Saharan provinces of all sorts of illegal commercial activities.
Moroccan authorities also started asphalting a road to monitor better the area and bar traffickers and terrorist groups from setting up a safe haven in the buffer zone beyond Morocco’s security berm on the borders with Mauritania.
The Polisario reacted to the anti-trafficking and anti-terror move by positioning its militiamen in the strip.