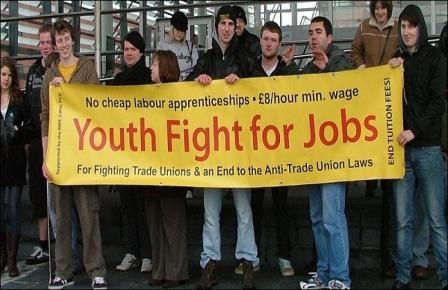 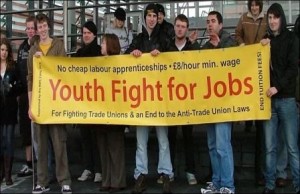 In London, unemployment is in news coverage every week. With 22 percent of the 16-25 years olds looking for a job in 2012, that is more than a million Britons.

Meeting with Thomas, 24, Londoner just hired, after months on the dole.

Leather jacket, charming smile, the ginger sits. Joyful even when he recalls these last harsh months. More than two years ago, he was approached to work as assistant to the artistic director of a British club. That was a great opportunity he did not want to miss. He packed, left Paris, where he used to live, and moved to London. His new company provided him the lodging, an apartment shared with co-workers. He started to get used to his new life and even to enjoy it. But this was not to last. Only few months after he was hired, the club associates faced problems and dissolved the company. Thomas was fired and had only few days to leave the house.

His longest journey was starting. It would last for a whole year. Finding a job was a real uphill battle for Thomas, event planner. He had experience but no diploma. He was not patient enough to graduate from university.
Jobless, penniless, homeless, Thomas had no other choice than return to live with his parents.
Thomas is not the only one choosing this solution. There are more that 3 million Britons aged between 20 and 34 who come back seeking shelter at their parents’ home.
Thomas is nearing the bottom but does not stop sending applications everywhere. No positive answers, not even for an interview… despair is looming…

Finally, thanks to the recommendations of a relative, Thomas gets an internship at a newspaper. Everything goes well. Thomas works hard. Very enthusiastic, he gives his best. His hard work pays off. The newspaper hires him for a full time job. “I love what I am doing. I have responsibilities. I have to plan special events for the magazine. It is a lot of work, of course, but it is better to have more than not enough.”
The young man cannot forget how he spent the past year but is confident about the future.
All jobless youths are not all that lucky. Numerous young graduates accept a job for which they are overqualified while hundreds find nothing. Every day, they go out or sit at their computers to search for a job. Everyday they have to find means to get a meal, especially when it is so cold. Everyday, they hope for a better tomorrow that does not come.
And everyday, the numbers of idle young people swell, reaching peaks. While in 2004, 12 percent of the 16-25 were in the job market, in 2011, this rate reached 21 percent.

At the heart of the action

The alarming situation worries the public. The government is widely criticized and is accused of ineffectiveness.
It is time for media to act. Recently, a campaign run by the free newspaper, the Evening Standard, informed its readers of the advantages of internships. A response to unemployment. An interesting alternative, among several to examine.

North Africa Post's news desk is composed of journalists and editors, who are constantly working to provide new and accurate stories to NAP readers.
NEWER POSTFIFM : And the winner is…The Middle East…
OLDER POSTLibya: Working On Long And Short Projects…