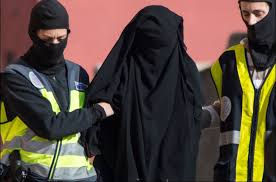 Spanish security authorities in Catalonia announced Wednesday the arrest of a 19-year old Moroccan woman charged for apology and recruitment for the Islamic State group (IS).

The woman born in Morocco has lived in Catalonia for several years. She has been arrested at Terrasse, near Barcelona, local minister of the Interior of la Generalitat, Jordi Jane, said at a Parliament briefing.

The young woman, according to Catalonian official, had been active on social media to promote the terrorist group and incite sympathizers to go for jihad.

She posted around 213 propaganda messages on social media calling for her followers (173) to stage attacks and cause havoc in public places.

She is also accused of indoctrinating women for the benefit of IS and met one alleged IS terrorist who had been arrested previously in the region.

Her arrest was made possible thanks to Catalonia police at the request from the Audiencia Nacional, the country’s highest criminal court.