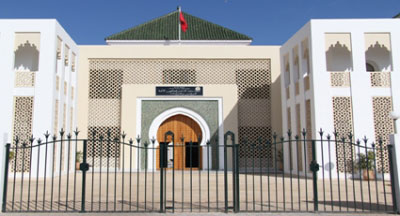 French paper, L’Express, highlighted the role played by Mohammed VI Institute for the Training of Imams in boosting Morocco’s clout in the continent and championing a moderate and tolerant Islam against the threat of extremism.

Promoting the lofty values of tolerance inherent to Islam is a praiseworthy endeavor pursued by the Institute in a bid to counter calls for extremism at the local and international level, underscores the French newspaper.

The Institute, located in Rabat, has been offering training to Imams and preachers from different African countries such as Mali, Cote d’Ivoire, Nigeria, Chad as well as European countries, including France, adds the same source, noting that 50 Frenchman out of a total of 1195 students are currently receiving training on the genuine precepts of Islam.
The reform of the religious sphere is a key part in Morocco’s counter terrorism strategy. The Institute,  which trains Imams, Murshideen and Murshidat (male and female preachers), is a vector of religious diplomacy aiming to counter the terrorist threat that feeds on extremist interpretations of religions with a view to destabilize the region.

The paper also highlights that Morocco is becoming a hub for spreading tolerant Islam, noting that French Foreign Minister Laurent Fabius and Minister for Endowments and Islamic Affairs Ahmed Toufiq signed an agreement in 2015 to offer training within the institute to Imams of French mosques.
Morocco also launched the Mohammed VI Foundation for African Ulemas, an academic institution based in Fez that aims at uniting the efforts of Muslim scholars to promote tolerant Islam and counter extremism and radicalization on the continent.