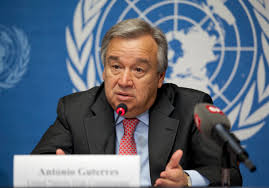 UN Secretary General Antonio Guterres urged the head of the Polisario separatists Brahim Ghali to abide by the 1991 ceasefire agreement and withdraw militias from Guerguarat area on the borders with Mauritania in the demilitarized buffer strip.

The talks between Guterres and Ghali took place in New York last Friday. Inner City Press reports that outgoing UN Envoy to the Sahara, Christopher Ross attended the meeting although he presented his resignation few days ago.

Ross who talked to the press following the meeting said that the emphasis was placed on the need for the Polisario to withdraw its troops from Guerguarat buffer strip in the southernmost tip of the Saharan provinces.

He said the UN Secretary General wants to relaunch negotiations between the parties to the Sahara dispute and stressed the need for the Polisario to withdraw armed men from Guerguarat following the example of Morocco.

King Mohammed VI, in his quality as supreme commander of the Royal armed forces, ordered the unilateral withdrawal of Moroccan troops from Guerguarat following a phone call with Guterres during which the Monarch expressed concerns at the dangers to the ceasefire agreement posed by the Polisario’s provocations. The withdrawal came in response to Guterres call for both parties to leave the demilitarized buffer strip.

Despite the call by Gueteres for the need to maintain the flow of commercial traffic between Morocco and its southern neighbors unhindered, the Polisario obstinately harasses and blocks the movement of Moroccan trucks in the buffer strip of Guerguarat.

Polisario armed men set up checkpoints forcing Moroccan drivers to remove Moroccan signs such as Moroccan maps or registration plates and threatening to fire on those who refuse to abide.

Algeria has recently donated military equipment to the Polisario that it uses as a tool to destabilize Morocco and sap all efforts seeking to find a lasting, political and mutually acceptable solution to the Sahara conflict based on the Moroccan autonomy initiative.