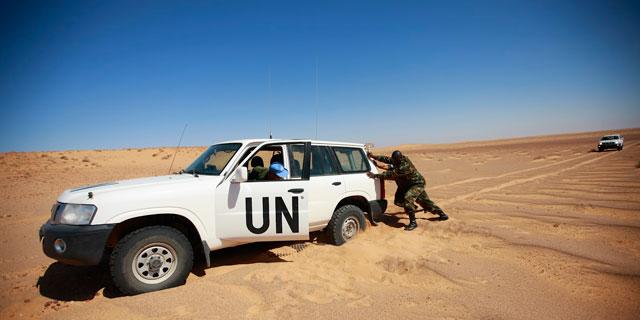 The Special Representative for the Sahara and Head of the MINURSO, Kim Bolduc met with Polisario officials in their rear base in Tindouf, southwestern Algeria, to discuss the situation in Guerguarat, the southernmost tip of the Saharan provinces in the buffer strip on the borders with Mauritania, where polisario militiamen are still stationed after Morocco’s unilateral withdrawal.

Bolduc of Canada, who was accompanied by Chinese Wang Xiaojun Force Commander of the MINURSO, visited Tindouf to de-escalate the tensions in the Guerguarat region after the Polisario militiamen refused to withdraw from the buffer strip at the call of the UN Secretary General. The UN Secretary General had urged the two parties to retreat from the buffer zone which is supposed to be demilitarized by virtue of the 1991 cease fire agreement.

Yet, the Secretary General special representative returned from her urgent trip to Tindouf empty-handed, with the Polisario refusing to pledge to withdraw from the area, according to local press reports.

The Polisario, which acts upon directives from its mentors in the Algerian military junta, has tried to divert attention from Morocco’s recent diplomatic headway in Africa by increasing tensions in the Guerguarat area going as far as blocking the free flow of goods.

Polisario armed militiamen forced several trucks to turn round in an attempt to provoke Morocco to respond militarily and smear its reputation and undermine its efforts to find a lasting political and peaceful solution to the Sahara issue.

The retreat by Morocco from Guarguarat which it entered to clear the area from smuggling and other illegal commercial activities came in response to a recent phone conversation with Antonio Guterres during which King Mohammed VI urged the UN Chief to take immediate measures to halt Polisario’s provocations, which are detrimental to the ceasefire agreement and hence to the region’s security and stability.

Afterwards, the UN Secretary General issued a statement calling all parties to withdraw their forces from the buffer strip and stressing the need to maintain regular commercial traffic unhindered.

The withdrawal of Moroccan troops took the polisario militias and their Algerian sponsors by surprise at a moment they were waiting for the Moroccan army to fall in the trap of provocation.

Now that it has withdrawn its troops beyond its security walls while the Polisario obstinately maintains its armed men within the buffer zone in an utter disregard for the cease fire agreement, Morocco has scored a major point and evidenced its sincere willingness to safeguard the region’s peace and security. However, self-defense is guaranteed by the UN charter and any slight mistake by the Polisario would trigger a commensurate response. By retreating from Guerguarat, Morocco showed that the Polisario and its paymasters in Algiers are the parties seeking chaos in the region.