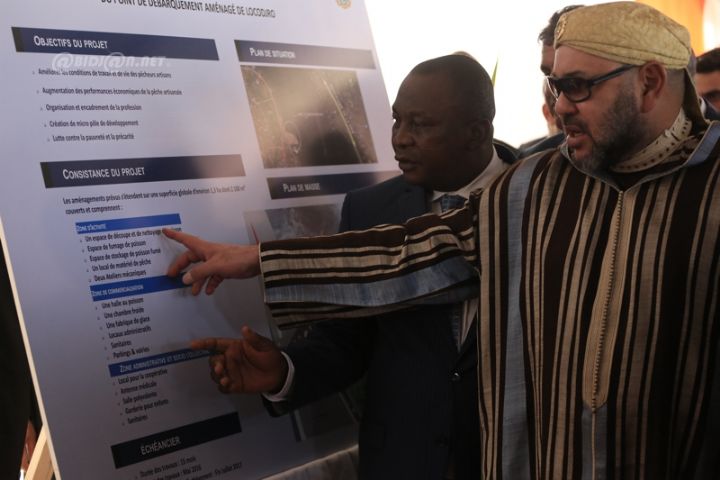 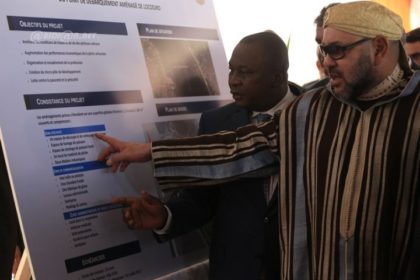 King Mohammed VI who is on a work and friendship visit in Côte d’Ivoire visited Thursday two fish landing spots in Locodjro and Grand Lahou and enquired about the progress made in the implementation of these projects, financed by Morocco.

The King’s keenness to oversee personally the progress of the two-socio-economic projects translates his unwavering commitment to promoting Moroccan-Ivorian cooperation and also his dedication to fighting poverty and precariousness, and raising the living standards of African peoples.

Likewise, the Monarch gives substance to the African strategy he has been spearheading for years in a bid to promote a human, sustainable and integrated development and stimulate a genuine South-South partnership.

The two fishing projects, designed to be socio-economic development hubs, will contribute to promoting small-scale fisheries sector, by organizing and supervising the trade, improving the quality of the product, and promoting the living and working conditions of traditional fishing communities, fishmongers, fish dryers and fish smokers.

The projects are endowed with state of the art equipment, including fish halls, ice factories, cold-storage rooms, smoking ovens and fish dryers, as well as medical dispensaries and daycare centers to help mothers working in the fishing sector.

The projects will generate new jobs, optimize the economic performance of traditional fishing, and increase the income of more than 7,000 people.

Some fishermen who were on the spot expressed heartfelt thanks and gratitude to the Moroccan Monarch for sponsoring these projects that would have, they said, truly life changing effect on the fishing communities.

The projects, which cost about $565,000, are funded by the Mohammed VI Foundation for Sustainable Development, the Moroccan Ministry of Agriculture and Fisheries, with the facilitation of Attijariwafa Bank.

Part of its innovative strategy seeking to share its experience in wealth and job generating sectors and to diversify and expand the scope of its cooperation with African States, Morocco is financing two similar fish landing projects in Conakry, Guinea, and one in Dakar.

On the side lines of the Royal visit, the Côte d’Ivoire-Morocco Economic Impetus Group held its third forum to survey the achievements it realized since it was set up in June 2015.

Côte D’Ivoire has been receiving most of Morocco’s foreign direct investments thanks to sustained efforts by the business community in the two countries and the existence of a strong political willingness evidenced by the close ties between the leadership of the two countries.