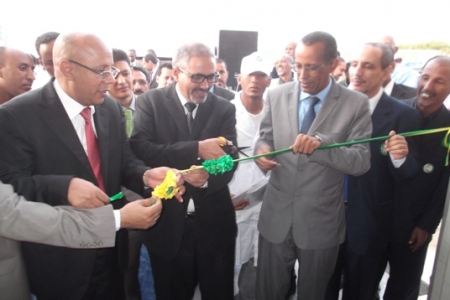 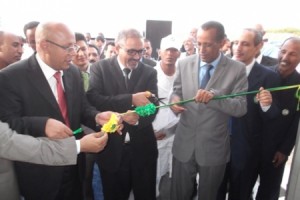 The Prime Minister, Dr Mohamed Ould Moulaye Lagdaf attended the inauguration of the distribution of electricity in the city of Nouadhibou aimed at easing at ensuring the continuity of economic and daily services in a city which often comes to a halt because of power shortages. It was financed at a cost of more than 1,5 million Ouguiyas by the state.
In the same vein, he also inaugurated the extension of the power plant of the city capacity now reaches 32 MW, a remarkable increase of 220%. The latter was financed by the Arab Fund for Economic and Social Development at a substantial amount of 8.2 billion ouguiyas.
Speaking at the event, Minister Taleb Ould Abdival of Energy, mines and petroleum highlighted that the city of Nouadhibou has never received such a gesture in the energy domain. The project has doubled the length of electricity connection, enhance the rate of the electrical current coverage and increase the level of public access to electricity services. He went on to say that the appliances which will be added on will be in accordance with international standards and will take into consideration the concerns of the citizens.
The minister said concluded that these projects are part of the government’s priorities in implementing the policies of the head of state, Presidnet Mohamed Ould Abdel Aziz who is dedicated to improving the living conditions of the population before pointing out that electricity can’t be ignored in today’s daily activities. He also stressed that these achievements will cover all domestic and industrial needs of the city of Nouadhibou horizons until 2020.
The inauguration ceremony will be highlighted as the first time Nouadhibou gets an energy reserve of 15MW.

North Africa Post's news desk is composed of journalists and editors, who are constantly working to provide new and accurate stories to NAP readers.
NEWER POSTAlgeria: Bejaia to have new oil port
OLDER POSTEgypt’s cultural tourism to be boosted