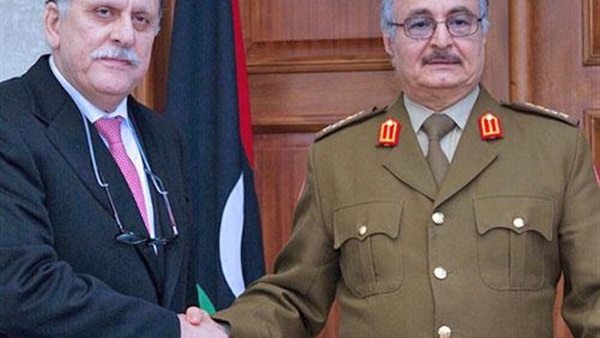 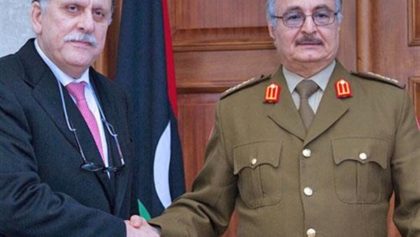 Head of the UN-backed Presidency Council (PC) Faiez Serraj and east-based army super commander Field Marshal Khalifa Haftar have flown to the Egyptian capital for direct talks under the aegis of the Egyptian government.

The two protagonists arrived in Cairo Monday for several-day talks in a move to find a solution to the Libyan political crisis, Libya Heralds reports.

Libya descended into chaos following Muammar Gaddafi’s ouster in 2011 in a NATO-backed revolution. Armed factions vying for power wreaked the stability of the country. The UN-backed PC born out of the Libyan Political Accord (LPA) in December 2015 and installed in Tripoli in March last year has been unable to assert its power.

Field Marshall Haftar, aligned with rival Beida-based government, has refused to pledge allegiance to the PC. According to the LPA, the Libyan army command should remain in the hands of the PC’s Head but Haftar and Libyan internationally recognized parliament, the House of Representatives (HoR) objected the provision.

Serraj is reportedly accompanied by Fathi Majbri, the PC member from Cyrenaica. Haftar on the other hand is accompanied by Abdul Basset Al-Badri, the Libyan ambassador in Riyadh and his close political adviser and friend.

Both Serraj and Haftar have been under pressure to meet for negotiations.

An early meeting between the two, scheduled for Monday, was postponed after neither side agreed to conditions set by the teams. Egyptian officials met separately with the two sides in an attempt to blow up hurdles.

According to the Libya Herald, Egyptian President was to chair a meeting between the two sides this Tuesday, a way to put pressure on the two of them. The Egyptian government has blocked media access to the talks.

It is reported that Serraj intends to announce in the few days to come a mini-government with a unified Libyan army headed by Haftar in cooperation with all military officers from across Libya.

The initiative has gathered the support of Algeria, Turkey, Tunisia and Egypt, which also pledged to back it up on the international front, Libya Express reports quoting a source, which spoke under condition of anonymity.