European Diplomats are seeking Russia’s help to use its clout over Libya’s strongman General Haftar, who command the Tobruk-based Libyan National Army (LNA), to broker a deal that will bring rival Libyan factions under the civilian command of the UN-backed government of national accord (GNA), set up in December 2015. 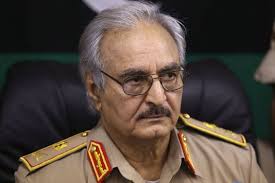 The European lead nation on Libya, Italy is set to hold talks with Russia to refrain it from empowering General Haftar to avert the emergence of a secular military dictatorship following the model of Sisi in Egypt and Bachar in Syria.

The EU fears that the continuing instability and lawlessness in Libya would trigger another refugee and migration crisis that would affect mostly Italy, which pushes hard to bring Libya’s rival factions together to find a negotiated political solution.

EU foreign policy Chief Federica Mogherini last week spoke by phone about Ukraine, Syria and Libya with Lavrov. The pair have agreed to meet in the coming weeks, perhaps on the sidelines of the Munich Security Conference.

“Both on Libya and Syria, we decided to find ways to join efforts and cooperate,” said Mogherini of her call with Lavrov, adding that working with the Russians to help Libyans unite their country “can only be a positive thing.”

For Italy, Moscow is an international player that may help bring about a lasting political solution to the chaos in Libya and consequently foster security cooperation with the north African countries and stem the flow of refugees.

The EU is turning to Russia whose ally in Libya General Haftar is advancing westwards crushing other rival factions including IS terrorists. Haftar has been emboldened by his military victories particularly following his September 2016 capture of the eastern oil sector, which accounts for two-thirds of Libya’s oil exports.

Russia, which has vehemently opposed NATO intervention that overthrew the decades-long Libyan dictator Gaddafi, sees new opportunities in the power vacuum in Libya where it tacitly endorses the all-powerful Libyan General Khalifa Haftar.

Several media reports have been speculating about a potential secret deal between Haftar and the Kremlin according to which Russia will arm Haftar’s forces in his endeavour to gain control of the whole country in return for a Russian military base in Libya. Such reports have not been confirmed by the Russian administration.