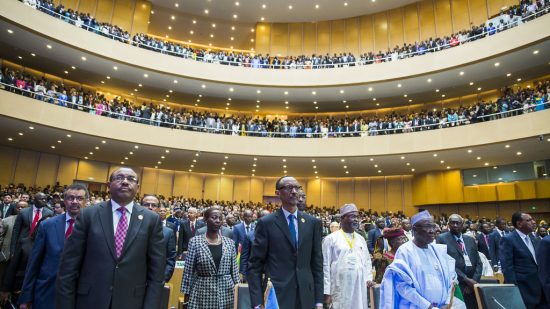 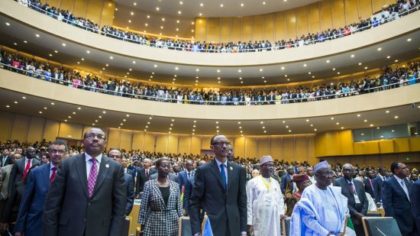 King Mohammed VI delivered a landmark speech before the heads of state attending the 28th summit of the African Union that massively endorsed Morocco’s readmission within the continental organization.

In the speech, King Mohammed VI underscored the south-south cooperation underpinning the Kingdom’s African endeavor and the large-scale win-win partnerships sealed with a range of African countries to boost co-development efforts in the continent.

The Monarch started his address by thanking Morocco’s friends within the pan-African organization for their outspoken support for the Kingdom, a support that evidenced “solid bonds,” and noted that although it was necessary to withdraw from AU’s predecessor, the Organization of African Unity, OAU, Morocco has never turned its back to Africa.

Now, said the King, “it is time to return home; at a time when the Kingdom is among the most developed African nations and when a majority of Member States looks forward to our return, we have decided to join our family again. A family we had not really left!”

Despite Morocco’s absence from AU institutions, explained the Monarch, Morocco has maintained strong ties with sister African nations. “Strong bilateral relations have thus been significantly developed: since 2000, Morocco has signed nearly a thousand agreements with African countries, in various fields of cooperation.”

Highlighting Morocco’s efforts to boost ties with African countries, the King said that between 1956 and 1999, 515 agreements were signed, whereas 949 agreements have been signed since 2000.

“During this period I, personally, was keen to give fresh impetus to this action, by making more visits to various African sub-regions. On each of the 46 visits I paid to 25 African countries, numerous agreements were signed involving the public as well as the private sector,” the Sovereign went on to say, before he  underscored the importance of training in Morocco’s cooperation with African countries through granting thousands of scholarships to African students to continue their higher education in the Kingdom.

The King also elaborated on the major strategic projects that were sealed during his recent African tours. In this regard, he shed light on the importance of the African Atlantic Gas Pipeline, which was launched in partnership with Nigeria, saying, “this project will of course allow natural gas to be transported from gas-producing countries to Europe. But more than that, it will benefit the whole of West Africa.” The project, he added, “will, indeed, contribute to creating a regional electricity market and be a substantial source of energy, which will help develop industry, improve economic competitiveness and speed up social development.”

He explained that the project is geared towards creating “wealth for neighboring countries and populations, generating crucial momentum that will stimulate the emergence and the development of parallel projects.”

The project is also conducive for more peaceful bilateral and multilateral relations and for an environment conducive to development and growth.

Boosting agricultural productivity is another priority area for Morocco’s African action, said the King, noting that fertilizer production plants have been set up with both Ethiopia and Nigeria. “These projects will benefit the continent as a whole. As we know, basic food needs cannot be met with gas or oil.”

In this regards, the King pointed out to the Morocco-led initiative, dubbed Adaptation of African Agriculture, or Triple A Initiative, which was promoted during the COP22. “It is an innovative and extremely concrete response to the common challenges posed by climate change.”

The initiative, which aims at helping small farmers counter climate-change effects, has so far received the backing of some thirty African countries, said the king.

Touching on the security challenges facing the continent, King Mohammed VI emphasized Morocco’s commitment to African stability through promoting peace and security initiatives on the continent. “Since its independence, Morocco has contributed to six UN peace-keeping missions in Africa, engaging thousands of troops in various theaters of operation,” said the Monarch, noting that Moroccan forces are still present today in CAR and DRC.

“Morocco has also conducted a number of mediations which helped achieve substantial progress towards peace, namely in Libya and the Mano River region,” he added.

In his address, the Sovereign paid special attention to Morocco’s vision of south-south cooperation in the continent in line with an approach underpinned by solidarity and humanism. In this regards, the King pointed to Morocco’s migration policy in favor of Sub-Saharan citizens, noting that more than 25000 people benefited from the first phase of a large-scale regularization campaign that will help them integrate the Moroccan society.

“The second phase was successfully launched just a few weeks ago, in the same spirit of solidarity and humanism. We are proud of these actions,” said the King.

“All this constructive action to help migrants has bolstered Morocco’s image and strengthened the bonds we had already forged,” explained the King, stressing that “it is to Africa that the Kingdom is seeking to give the leadership.”

The Monarch made it clear that after its return to the African Union, Morocco will have a platform to constructively contribute to the agenda of activities and help bring about unity and progress.

“We participated in the creation of this beautiful pan-African edifice and we naturally look forward to regaining the place that is ours within it,” he said.

He stressed that Morocco as “an emerging economy, with acknowledged expertise;” is today one of the most prosperous nations in Africa, adding that the Kingdom “has always considered that its strength comes primarily from the integration of the Maghreb sub-region.”

“It is however clear that the flame of the Arab Maghreb Union has faded, because faith in a common interest has vanished!,” deplored the King, saying that “today, we regret to see that the Maghreb Union is the least integrated region in the African continent, if not in the whole world.“

In this respect, the King urged following the example of neighboring African sub-regions in order for the Maghreb Union “to live up to the ambitions of the Marrakesh Treaty, which gave birth to it 28 years ago.”

Commitment to the prosperity of African citizens

Morocco’s African commitment is to serve African citizens, stressed the King. “My country has opted to share and transfer its know-how; in concrete terms, it is offering to build a safe, solidarity-based future.”

“We enthusiastically invite African nations to join our country’s dynamism and to give new impetus to the whole of our continent,” said the King, adding that “It is time for Africa to benefit from Africa’s wealth.”

“We must work to enable our land, after decades of looting, to enter an era of prosperity. Admittedly, colonialism is not the sole cause of Africa’s problems. However, its negative impact persists,” he explained.

“Africa can and must validate, on its own, its elections and thus endorse its citizens’ free choice. It has regulatory tools and legal institutions, such as Constitutional Councils and Supreme Courts, which can settle electoral disputes and appeals,” noted the King, lauding the new generation of “uninhibited leaders” in the continent who “are working for the stability, political openness, economic development and social progress of their peoples.”

The Monarch concluded his speech by reaffirming Morocco’s “commitment to the development and prosperity of African citizens. “We, peoples of Africa, have the means and the genius; together, we can fulfill the aspirations of our peoples.”