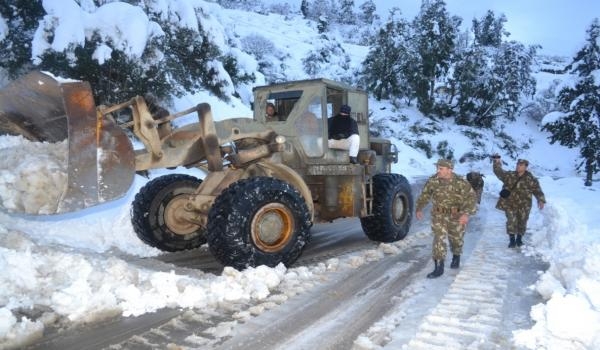 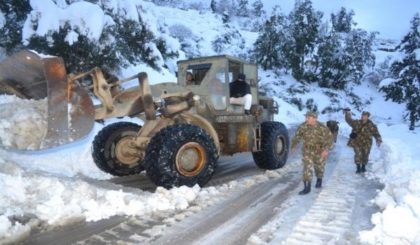 Several Algerian villages in the central and eastern regions of the North African country, member of the OPEC, have been isolated by snow, adding more misery to the Algerians who are already suffering from military crackdown, soaring prices and deteriorating living conditions.

According to latest weather forecasts, the conditions will get much worse in the coming days as more snow and blizzards are expected to hit several cities in the north of the country including the capital.

The most affected regions are Setif, Béjaïa, Bouira, Batna and Constantine, which are cut off from the rest of the country after heavy snowfall blocked several roads, forcing the inhabitants to remain inside their home while the administrations and schools closed their doors.

In Kabylie, several roads are still closed, isolating villages, particularly in Tizi-Ouzou region. This chaotic situation has generated a real crisis of supply of butane gas causing the outbreak of new social unrest in over 20 provinces.

Many flights were also cancelled due to bad weather, which killed so far a dozen of people and caused many road accidents, according to local authorities which are finding it more and more difficult to quell growing demonstrators demanding justice, decent life, good governance and jobs.

The Kabylie and other neighboring provinces have been rocked lately by violent clashes between security forces and demonstrators protesting against the rising cost of living and higher taxes imposed by the appropriation bill, which came into force on 1st January. The 2017 law voted in December included new increases in taxes on fuel, tobacco and electricity to stem losses due to falling crude oil prices.

This sharp rise in violence is similar to that occurred in Algiers early 2011. At that time, the youths’ uprising, which started in Bab el Oued before spreading to other districts in the capital, had been described as “bread and sugar” riots (two products subsidized by the state) in protest against the increase in the price of basic products.

However, the government went on to blame certain business interests for the unrest in 2011 and is now making the same claims. Instead of addressing the legitimate socioeconomic claims of protesters, Algerian authorities are choosing a hardline. Are they pushing the country towards a new civil war?