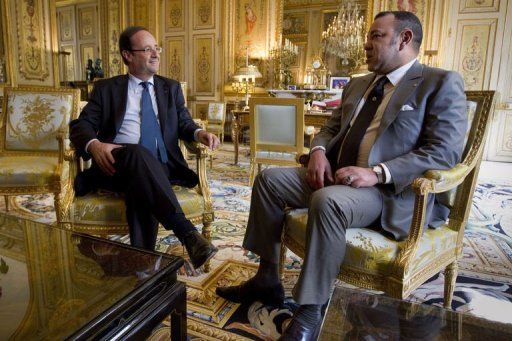 French President François Hollande will pay early 2013 a visit to Morocco at the invitation of King Mohammed VI.

The announcement was made Wednesday in the two countries’ capitals following a telephone call between the two heads of state who both said they were looking forward to meeting each other.
President Hollande thanked the king for his invitation and said, according to an Elysée press release, that he “will be happy” to visit the Kingdom, while a statement by the King’s office said King Mohammed VI was pleased to welcome President Hollande in Morocco and was looking forward to this visit.
The visit translates the two sides’ willingness to deepen further the already special partnership binding the two countries and will provide the two heads of state with the opportunity to assess Moroccan-French multifaceted fruitful cooperation.
The phone talks between the two men surveyed a set of major topical international and regional issues of common interest, including the deteriorating situation in the Sahel and particularly in Mali, which is endangering the whole region. They also spoke of the situation in Syria and of the upcoming meeting of the “Group of Friends of Syria”, scheduled for 12 December in Marrakech. They underscored in this regard that the meeting will renew backing to the national coalition of the forces of the Syrian revolution and opposition as a central element of the necessary political transition in Syria.
Regarding the situation in the Middle East, the two leaders reaffirmed their determination to promote the resumption of negotiations between Israelis and Palestinians and move forward towards the two-state solution, as this is the only means likely to ensure a lasting peace.
The King of Morocco, who is also chairman of the Al-Quds Committee, an offshoot of the Organization of Islamic Cooperation (OIC) thanked France for its decision to vote for the resolution that would change the Palestinian Authority’s U.N. observer status from “entity” to “non-member state”.
The U.N. General Assembly’s vote would implicitly recognize a sovereign state of Palestine.
Over the years, not to say centuries, Morocco and France have established an excellent cooperation, a strong partnership and an enduring alliance at the level of their bilateral relations and at the level of multilateral and internationals relations as well.
As a token of these longstanding relations, King Mohammed VI was the first foreign head of state to be received at the Elysée palace by the French president François Hollande immediately after he was elected and after he took the reins of power last May.
A statement released by the Elysée after these summit talks had then voiced President Hollande’s “attachment to friendship between France and Morocco” and France’s support to the Kingdom “in the path it chose to modernize the economy and consolidate the rule of law.”
Given the strategic interests shared by the two countries, given the fact that France is Morocco’s major economic partner and Morocco is France’s stanch ally in the Maghreb region, France, regardless whether it is ruled by a rightist or by a leftist party, has always extended clear and strong economic, political and diplomatic support to Morocco and sought all possible means to upgrade bilateral relations at all levels.
Thus, since the election of François Hollande last May, exchange of visits between French and Moroccan ministerial delegations has intensified. This exchange will be crowned by the 11th meeting of the High-Level French-Moroccan commission to be held December 11-12 in Morocco, under the chairmanship of the two countries’ heads of government.
On the sidelines of the commission 11th session, CEOs and managers of a hundred French companies will hold a meeting with their Moroccan peers under the theme, “an exceptional partnership at the service of shared competitiveness.”
French businessmen and employers are said determined to upgrade their economic presence in Morocco and their partnership with la Confédération Générale des Enterprises du Maroc (CGEM), that some French businessmen describe as the best equipped and best organized employers’ union in North Africa.
According to press reports, the businessmen meeting, to be held in Casablanca, will focus on sectors with high growth potential such as infrastructure, transportation, renewable energy, agriculture and car industry.
All these scheduled meetings, whether at summit level, at ministerial level or at the level of economic operators illustrate perfectly the exceptional nature of relationships and the density of the political dialogue between the two sides and give evidence, if need be, that this relationship based on trust, loyalty and mutual respect is unwavering and that the wonderful idyll between Morocco and France is continuing.

North Africa Post's news desk is composed of journalists and editors, who are constantly working to provide new and accurate stories to NAP readers.
NEWER POSTPost-Arab Spring Tourism Industry: Back in Business
OLDER POSTTunisia might call on IMF for financing