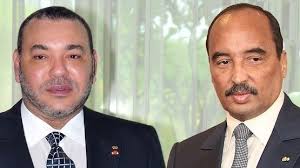 King Mohammed VI of Morocco and President Mohammed ould Abdelaziz of Mauritania have voiced their shared determination to preserve the neighborliness and solidarity relationship existing between their two countries and to shield this relationship against any attempts to undermine it, whatever the origin or motivation of these attempts.

This came during a phone call King Mohammed VI had on Tuesday with President Ould Abdelaziz, a statement from the Royal Office said.

During the phone call, the King reiterated to the Mauritanian President “his unwavering support and friendship as well as his attachment to the relationship of neighborliness and solidarity between the two countries, that is based on the age-old and family ties, which have always existed between the two peoples,” the statement said.

The Moroccan Monarch also made it clear to the Mauritanian Head of State that Morocco recognizes Mauritania’s territorial integrity in accordance with international law, the Royal Office statement said, adding that the two leaders expressed their determination to shield this relationship against any attempts seeking to undermine it, whatever the origin and motivation of these attempts.

In this vein, the Sovereign has decided to dispatch the Head of Government Abdelilah Benkirane and the Junior Foreign Minister Nasser Bourita as envoys to the Mauritanian President, and asked them “to dispel any misunderstanding that could have a negative impact on the excellent relations that exist between Morocco and Mauritania,” the statement added.

The royal envoys are expected to arrive in Mauritania on Wednesday.

The phone call with the Mauritanian President and the decision to dispatch envoys to Mauritania came in the morrow of the deplorable remarks by the Istiqlal party’s Secretary General, Hamid Chabat, regarding the borders and territorial integrity of Mauritania.

Chabat had said at a meeting on Saturday that Mauritania is a Moroccan territory and that the historical borders of Morocco stretch from Ceuta to the Senegal River.

These statements infuriated both the Moroccan and the Mauritanian political class.

The Moroccan Foreign Ministry rejected in the strongest terms Chabat’s verbal blunder as “dangerous and irresponsible” and renewed, in a statement released Monday, Morocco’s full respect for the Mauritanian borders as they are internationally recognized.

Chabat was also harshly rebuked by members of the Istiqlal Party’s Council of Elders at a meeting convened Monday evening.

According to press reports, during the meeting, Mhamed Boucetta and Abbas El Fassi, both former Secretary Generals of the Istiqlal Party, expressed their remonstrances to Chabat over his remarks on Mauritania and challenged him to find in the party’s reports and memos any reference contesting Mauritania’s territorial integrity.

North Africa Post's news desk is composed of journalists and editors, who are constantly working to provide new and accurate stories to NAP readers.
NEWER POSTAlgeria: 55,000 People Charged for Terrorism Related Crimes since the 90s
OLDER POSTMorocco-Mauritania: Benkirane Heads to Nouakchott to Put off Fire Set by Istiqlal Party