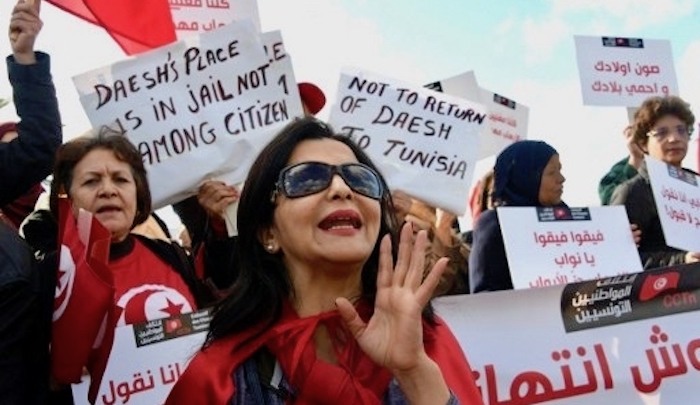 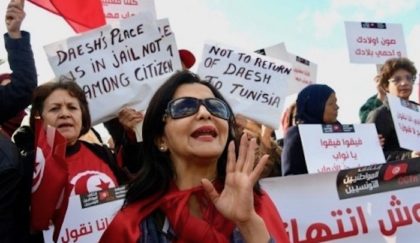 Tunisians gathered in front of the parliament, during the weekend, to protest against the government’s policies towards Tunisian nationals returning from fighting for jihadist groups.

The protesters urged authorities to adopt a ‘no to freedom for terrorist groups’ by imprisoning them as well as not accepting them to return to the country. The country’s security forces joined their voice to the protest movement and called on the government to undertake “exceptional measures” to stop the return of Tunisian “terrorists from hotbeds of unrest” to the country because their arrival is “worrying and could lead to the Somalisation of the country.”

Interior Minister Hedi Majboub informed the parliament on Friday that around 800 Tunisians have already returned from fighting for extremist groups in other countries.

Tunisia has the highest number of citizens fighting for extremist groups but President Beji Caid Essebsi claimed that “many of them want to return and we can’t prevent a Tunisian from entering to his country.” After he was criticized for this statement, he promised that “we will not be indulgent with the terrorists.”

The national union of the security forces warned that these fighters “have received military training and have learnt to use all sorts of sophisticated weapons.” Tunisians who have pledged allegiance to the Islamic State group or the al-Qaeda network have carried out fatal attacks in the country and abroad killing more than hundred people altogether.

Safety concerns in the country reached new levels after it was revealed that Tunisian national Anis Amri allegedly carried out the Monday Berlin Christmas market attack killing at least 12 people. Three people were arrested in Tunisia for their links with the assailant who was killed in Italy while on the run.

Tunisian authorities have admitted that there are terrorist cells in the country and efforts are ongoing to neutralize them. The country’s border with Algeria and Libya has been a safe haven for extremist groups.