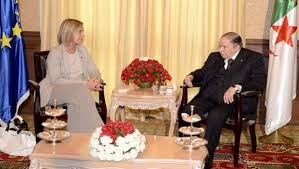 Concern in the EU over Instability Prospects in Algeria

EU officials and media continue to voice concern over the threats of instability in Algeria, which braces for a political crisis marked by the opacity of the regime and disagreements on who will succeed the ailing President Bouteflika and an economic crisis triggered by shrinking oil revenues.

“Europe should draw lessons from the tragedy in Aleppo. It should prepare for a new crisis emerging in its immediate neighborhood: Algeria with its 40 million people is waiting for the clinical death of President Bouteflika, who has been unable to rule for years,” said Pierre Defraigne, Honorary Director General at the European Commission Executive and Executive Director of the Madariaga at the College of Europe.

Disagreement on who will be at the helm of the Algerian regime after Bouteflika will spark a decades-long conflict between Islamists and the military junta, he noted, adding that the widespread corruption and oppression provide combustible material for a civil war in the North African country.

“Schengen will not be able to resist as well as the EU’s unity,” he warned, alluding to the waves of Algerian refugees that will flow to Europe in the case of a civil war.

In the same vein, British weekly, The Spectator, recently published an article showing Algeria as the biggest danger facing the EU. The author, Stephen Pollard, argues that the death of long-serving President Bouteflika will lead to the implosion of Algeria as the Islamists whom he has kept at bay by a firm grip will fill in the void.

He said that intelligence services in western countries are aware of the combustible situation in Algeria where a resurgence of Islamists is impending after the Bouteflika era.

He explained that Islamist leaders have switched tactics as they managed to gear education to their ideological referential and campaigned to block any government move towards modernity, as they did with the family code which keeps women subservient to men.

The Islamists’ move to seize power after the death of Bouteflika will certainly trigger a civil war that will dwarf the war in Syria, he said. “An Algerian civil war would create huge numbers of refugees,” said the author, putting the numbers of expected refugees between 10 to 15 million.