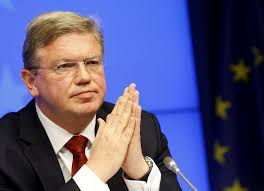 Morocco and Tunisia managed to outlive the Arab Spring from which they emerged as success stories in the region thanks to the vitality of their civil societies and the spirit of compromise within their respective political class, former EU Commissioner for Enlargement and European Neighborhood Policy, Stefan Fule said.

In an interview with the EUbulletin, the former EU Commissioner explained that the “success stories” of the two North African countries hinge on three elements. First the two countries have “strong civil societies,” he said, adding that the second element, the dominant political formations, including Islamists, “have been ready to make some painful compromise delivering their service to the country and to its citizens.”

The third element, according to Fule, is that the two countries have shown willingness to cooperate with the EU in implementing a set of reforms.

The former EU official went on to deplore the current turmoil in the region. He ascribed some of the failures of the European Neighborhood Policy in creating a ring of stability in this neighborhood to false assumptions on the ability of authoritarian and totalitarian regimes in ensuring stability without taking into account the values of the rule of law, dignity and democracy.