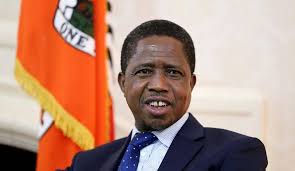 Ahead of the upcoming visit by King Mohammed VI to Lusaka, President of Zambia, Edgar Lungu, expressed strong will to boost ties with Morocco, several Zambian media outlets reported.

“I do look forward to receiving His Majesty at the end of the week. I am confident we shall have fruitful discussions aimed at augmenting bilateral cooperation between our two countries,” Lungu said as he received letters of credentials from the new Moroccan Ambassador to Zambia Saadia El Alaoui at the State House.

Lungu added that Zambia and Morocco have cordial relations based on strong bonds of friendship, respect and bilateral cooperation.

The appointment of a Moroccan Ambassador to Lusaka will add momentum to bilateral ties, he said.

Lungu also lauded the efforts spearheaded by King Mohammed VI to combat climate change and commended the success of the UN Climate Summit held in Marrakech in November.

Zambia is part of a royal African tour that aims at boosting ties with a range of African countries. So far the Moroccan King has visited Rwanda, Tanzania, Ethiopia, Madagascar and Nigeria. Each visit culminates with the signing of partnerships and agreements aiming at creating joint ventures in fields ranging from agriculture, banking, tourism, industry, infrastructure to culture and religious affairs.

The visits showcase Morocco’s clout and influence in Africa as an advocate of a south-south cooperation underpinned by win-win partnerships.

The royal tour is taking place at a time the Kingdom has requested to regain its natural place in Africa’s institutional family after a decades-long absence on the backdrop of a lack of neutrality by the organization in admitting a separatist entity.

Morocco’s economic influence in Africa will be conducive to gaining political allies in the African Union, and consequently repairing a historical injustice and gathering support for Morocco’s territorial integrity.

North Africa Post's news desk is composed of journalists and editors, who are constantly working to provide new and accurate stories to NAP readers.
NEWER POSTA Chinese General in Command of MINURSO
OLDER POSTLibya: GNA forces rescue last buildings from IS in Sirte