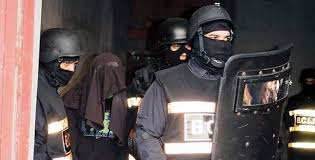 Moroccan authorities busted a terrorist cell of 8 members loyal to the terrorist IS organization, known as Daesh, in the cities of Tangier and Fez.

A statement by the Interior Ministry said that the cell was busted by Morocco’s Bureau of Judicial Investigations (BCIJ) during an operation that led to the seizure of a shotgun, ammunition, bladed weapons as well as documents containing suspicious chemical formulas.

The arrested individuals were planning terrorist attacks in Morocco and abroad and include two former detainees in terror-related charges, the Ministry added.

Investigations show that the cell members maintain close links with IS members in Syria and Iraq and were active in recruiting and sending Moroccan fighters to the ranks of the terrorist organization in the Middle East.

The cell was plotting to send extremist members to Iraq and Syria where they can be trained before returning to perpetrate terrorist attacks in Morocco, the Ministry said.