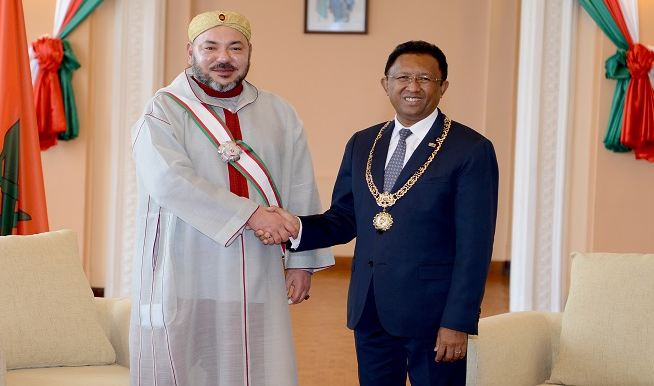 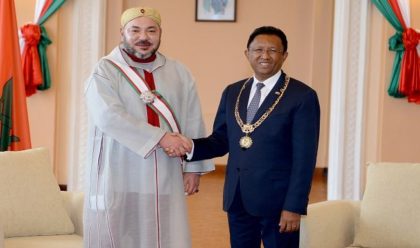 Morocco and Madagascar have decided to lift their cooperation in all sectors to new higher levels within the frame of a solidarity-based and win-win partnership.
The two countries hailed the excellent friendship ties existing between Moroccan and Malagasy people and the 12 intergovernmental agreements, inked in the fields of politics, agriculture, sea fishing, energy, logistics, taxation, environment protection, water, mining, training, tourism and civil service, said a joint statement issued Thursday after the visit of King Mohammed VI in Madagascar.
The document also referred to the joint business forum held during the royal visit to Madagascar and which was crowned with signing of 10 agreements in the fields of banking, insurance and microfinance.
King Mohammed VI and President Hery Rajaonarimampianina called on the private sector, economic operators and investors of the two countries to seize the joint business opportunities.
The two countries Heads of State stressed the need to strengthen political dialogue between the two countries, added the joint statement, saying that Morocco and Madagascar will coordinate their stands regarding bilateral, regional and international issues of common interest.
According to the joint statement, President Hery Rajaonarimampianina hailed Morocco’s efforts to combat radicalization and violent extremism and expressed his appreciation of the cooperation between Morocco and the countries of the Sahelo-Saharan region in this field, voicing hope to see this cooperation be further consolidated to counter terrorism threat.
For his part, the Moroccan Sovereign praised the leadership of Malagasy President who is leading his country through the path of stability and assured him of Morocco’s commitment to accompany this brother country in its efforts to consolidate democracy and speed up socioeconomic development.