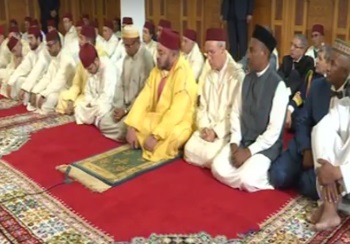 During each of his visits to African countries, King Mohammed VI makes sure to reach out to Muslim communities by promoting the values of tolerance, moderation and justice preached by Islam.

This Friday, in the mosque of Antananarivo, the Moroccan monarch attended a Friday prayer marked by a sermon in the French language highlighting the values of cooperation between nations in favor of humanity’s coexistence and well-being.

The Khotba (Friday sermon) cites verses from the Holy Quran and Prophet Mohammed’s sayings which call for cooperation and solidarity between nations. In this regards, the Moroccan Imam, who was speaking French to make the sermon intelligible to worshipers, stressed that religions are unanimous in upholding the values of love, justice, abnegation, altruism and peace.

The sermon also underscored that Islam, as is the case with other religions, can never be hijacked by a group of extremists, adding that Muslims around the globe will remain attached and faithful to the lofty values of their religion.

The Imam noted that King Mohammed VI’s visit to Madagascar is bringing love, cooperation and good advice in keeping up with the precepts of Islam, adding that the Moroccan monarch is on a pilgrimage to pay tribute to the land that hosted his late grandfather Mohammed V, during his exile in 1954 by the French authorities.

The sermon also shed light on the era when the two countries were fighting for their independence, recalling in this respect the Khotba delivered by late King Mohammed V in the mosque of Antsirabe, central Madagascar.

The Imam welcomed the peace and harmony prevailing between the followers of different religions in Madagascar, calling on the Malagasy Muslims to ensure the perpetuation of their country’s inter-religious coexistence and safeguard Islam from extremist attempts to sow discord and animosity within the Malagasy society.

At the end of the prayer, the Monarch donated copies of the holy Quran to the authorities in charge of managing religious affairs in Madagascar.

The Quran copies, published by the Mohammed VI Foundation for Holy Quran Publication, will be distributed in the different mosques of Madagascar.

King Mohammed VI, who is in Madagascar as part of a second leg of a second phase of an African tour, visited on Wednesday the city of Antsirabe where his late grandfather Mohammed V was exiled. On the occasion of this visit, the Monarch re-named the mosque of Antsirabe after the late King Mohammed V and donated copies of the holy Quran to the local Muslim community.

Last June, Morocco launched the Mohammed VI Foundation for African Ulemas, an academic institution based in Fez that aims at uniting the efforts of Muslim scholars to promote tolerant Islam and counter extremism and radicalization on the continent.

The new institution is also part of Morocco’s religious training programs which gained momentum with the launch in March 2015 of the leading Mohammed VI Institute for the Training of Imams in Rabat, providing training to hundreds of Imams from Africa and beyond.

North Africa Post's news desk is composed of journalists and editors, who are constantly working to provide new and accurate stories to NAP readers.
NEWER POSTSound Energy Confirms Success of Second Onshore Discovery in Eastern Morocco
OLDER POSTTurkey: We will flood you with refugees, Erdogan warnings to EU threats