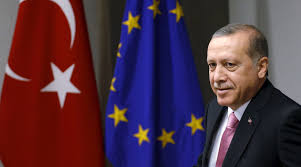 Turkey: We will flood you with refugees, Erdogan warnings to EU threats

A day after the European Parliament (EP) voted in favor of a nonbinding resolution to freeze talks on the adhesion of Turkey to the European Union (EU), President Erdogan blasted the EU bloc that the results have “no value in our eyes” and warned on Friday that Turkey could ease access to the EU by opening its borders. The resolution accused Ankara of “disproportionate repressive measures” in the aftermath of the failed July military coup and it was supported by 479 of the MPs while 37 voted against it.
Erdogan, speaking at a women’s rights conference, reminded the EP that Turkey is hosting around 3,5 million refugees, UN agencies estimated it around 2.5 million refugees by the end of 2015, after accusing them of having “never treated humanity honestly… (and) fairly.” He warned that Ankara will sideline the migrant deal reached with the EU in March if Europe goes “further” with its “empty threats.” Under the agreement, Turkey will receive expelled migrants in exchange for an aid package for refugees and an acceleration of its membership talks.
The whole process now seems to be in jeopardy as the Turkish president stressed that Europe was worried “when 50,000 immigrants reached (the border town) of Kapikule”, it will have much more to be concerned about if it doesn’t stop its threats because “those border gates will be opened.” “Do not forget, the west needs Turkey,” he said.
EU states will be holding their ordinary summit in December but they are not expected to support the resolution voted by the EP as migrant issues have already drove a wedge between the governments.
Relations between Turkey and the EU are at their lowest level. Erdogan had accused Turkey’s “Western friends” of their lack of support in the failed coup and the failure to keep their promises.