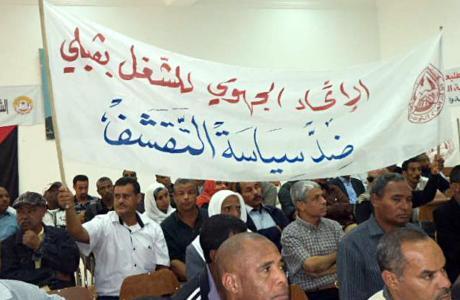 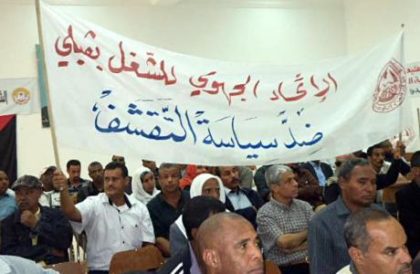 Tunisia’s draft budget is being welcomed with strikes against its planned austerity measures and one of the country’s most powerful trade unions, the Tunisian General Labor Union (UGTT), announced a strike in the civil service on 8 December if the wages are not increased. The government is considering freezing wage increment in its draft budget but UGTT’s administrative commission considers it to be a non-implementation of the agreement that they mutually reached before.
UGTT’s announcement was preceded by the general strike of the national lawyers’ guild that began on Wednesday in tribunals and will continue until further notice according to the guild’s president Ameur Mehrezi. The protest is due to the “negative developments on the fiscal issues concerning lawyers” which entails an 18% VAT on the bills of professions such as accountants, lawyers, financial consultants, notaries, judicial officers and architects. The draft budget is still being discussed by the lawmakers.
Prime Minister Chahed claimed that the wave of strikes is due to the cabinet’s abandonment of economic issues and instead focusing on strengthening constitutional institutions during the years that followed the 2011 uprising. He described the country’s present economic, social and security situation as “fine.” The Prime Minister had admitted at the beginning of the month, before his “strategic” visit to France, that the country is facing “an important economic challenge to consolidate the Tunisian democratic experience” because the revolution has taken its toll on the country’s economy and finances.
Chahed is hopeful that the “success” of the different economic and social factors will be boosted by the International Investment Conference to be held at the end of the month. He pointed out that Tunisia’s strategic location, specialized labor force coupled with its quality output and merchandise makes it a competitive country that will continue to attract international investors.

North Africa Post's news desk is composed of journalists and editors, who are constantly working to provide new and accurate stories to NAP readers.
NEWER POSTTurkey: We will flood you with refugees, Erdogan warnings to EU threats
OLDER POSTEgypt’s support to Haftar’s army is a national priority, President al-Sisi