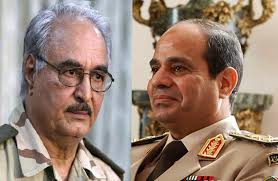 President al-Sisi of Egypt has confirmed that his government has been providing support to the Libyan National Army (LNA) under the command of Field Marshall Khalifa Haftar. The Egyptian president stated that “it is our country’s priority to back up national armies, for example in Libya, to assert control over Libyan territories and deal with extremist elements.” Haftar is loyal to the Torbuk-based House of Representatives that has been reluctant to approve the Libya Political Agreement to legitimize the UN-backed Government of National Accord. There have been reports that Egypt and the United Arab Emirates (UAE) provide logistical and military support to the LNA and had sometimes launched airstrikes on their opponents.
Khalifa Haftar had increased the area under the control of the LNA with the launch of the Dignity Operation in May 2014 claiming that he was combating the al-Qaeda militants cum ISIS. Egypt and the UAE reportedly contributed to the success of the operation as the unidentified warplanes that had participated in the process were from UAE and used Egypt’s western military bases to launch its attacks before the establishment of its airbase in Al-Marij city, eastern of Libya.
Cairo’s implication in the Libyan war and its support to the LNA can be considered as a preventive measure and an extension of its fight against extremist groups in the Sinai. The border between the two countries is notorious for the trafficking and smuggling of arms. Given that extremist groups in both countries have pledged allegiance to the Islamic State, their cooperation is a sign of mutual assistance in complementing each others effort and shortcomings. Reports are also emerging that Egypt has sent pilots to Syria to support President Assad regime against armed opposition groups supported by Saudi Arabia, Qatar, Turkey and even UAE.
Meanwhile, President Essebsi of Tunisia also confirmed that the US is flying drones in Tunisia to prevent military and potential attacks from “Libyan borders” but claimed that they are “not offensive” because they are for surveillance purposes as part of their “intelligence sharing” agreement. He gave assurances that the drones do not pose “any direct threat for any neighboring country, notably Algeria.”