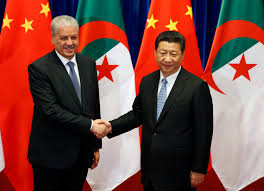 Despite the ever increasing Sino-Algerian economic relations, Algeria falls short of attracting significant Chinese Foreign Direct Investments unlike its neighbor Morocco where authorities set incentives for foreign investors, said the leading US think tank, Carnegei Middle East, in an article on its website.

The article, signed by Dalia Ghanem-Yazbeck and Lina Benabdallah, notes that while China has surpassed France as the largest importer into Algeria, the North African country receives only 6% of Chinese investments in Africa.

The authors advice the Algerian government to take measures to increase Chinese investments by drawing lessons from Morocco “where authorities recently removed visa requirements for investors from China, which will boost the number of Chinese tourists and investors in the kingdom.”

The article, titled “the Chinese Syndrome”, highlights the unattractiveness of the business climate in Algeria where “strict regulations are partially responsible for discouraging investment.”

The authors shed light on a set of unfavorable legislations such as the one on joint ventures by which a foreign investor cannot own more than 49% of a project.

That explains why Chinese investments in Algeria have been mostly limited to commercial loans, while Chinese FDIs in Algeria, estimated at $1.5 billion, are not exceeding 0.3% of total overseas Chinese FDI, says the article.

The authors shed light on the lack of skilled labor in Algeria which propels Chinese companies to bring Chinese workers whose numbers in Algeria rose from 22,000 in 2013 to 55,000 in 2015, explaining that this impacts the transfer of technology from the Chinese to Algerians..

“Algerians have little access to managerial positions. That’s because assigned employment quotas do not stipulate the kind of positions Algerians are supposed to occupy in joint projects. Hence, Algerians tend to hold blue-collar positions as janitors, security guards, drivers,” said the authors of the paper.