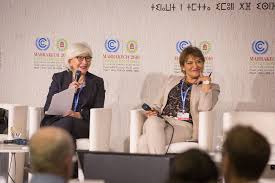 Participants at an event held in the civil society area at COP22 Green Zone called for enlisting the Khettara in the UNESCO’s world heritage list.

The Khettara, a centuries-old water transportation system using underground canals to irrigate fields in Moroccan oases, was at the heart of an event held by the Meftah Essad Foundation for Morocco’s Intangible Heritage.

The event was an opportunity to showcase the ecological efficiency of the Khettara as a time-honored system in Morocco’s dry and semi-dry lands naturally and sustainably pumping underground water through gently sloping tunnels.

“The participants in this event highlighted the ecological and patrimonial dimensions of the Khettara notably in terms of safeguarding oases against desertification and preserving water resources as the underground canals significantly curb evaporation and ensure the sustainable use of underground water,” COP22 organizing team said in a statement.

The statement quoted Abdelati Lahlou, member of the Meftah Essaad Foundation, as describing the Khettara as a manifestation of the adaptation of human beings with nature.

Lahlou added that including this Moroccan water management know-how on the UNESCO’s list of world heritage will help ensure the continuation of these environment-friendly irrigation structures.

“COP22 is an ideal opportunity to shed light on this Moroccan ecological heritage and raise awareness about the importance of its restoration,” he added.

The statement noted that the results of a study conducted by the Foundation in 2014 showed the Khettara contribution to fighting desertification and curbing rural flight.