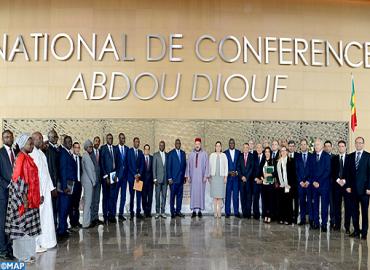 The Moroccan and Senegalese private sectors are willingly joining hands with governmental officials and institutions to enhance the two countries’ multidimensional cooperation.

In this vein, the Moroccan-Senegalese Economic Impetus Group presented Wednesday at a ceremony, co-chaired by King Mohammed VI, who is carrying on his official visit to Senegal, and President Macky Sall, a report on its activities with focus on the meeting the group members held on Tuesday in Dakar.

During this meeting, the group’s two sides agreed to sign four partnership agreements on tourism promotion and development through joint actions by the Moroccan Tourism Office and the Senegalese Agency for Tourism Promotion; an agreement instituting a periodic exhibition on social and solidarity-based economy and handicraft, the aim being to share good practices of the National Human Development Initiative (INDH) and the community development urgency program.

The two parties also agreed to ink a partnership agreement to set up a center for digital competences in Senegal and a draft agreement on a joint venture between Moroccan logistics group “La Voie Express” and Senegalese company “Tex Courrier”.

The Chairpersons of the Moroccan and Senegalese employers’ union, Miriem Bensalah Cheqroun and Baidy Agne, renewed, before the two heads of state, the group members’ commitment to establish a win-win partnership between the two countries’ private sectors.

They also expressed the group’s resolve to implement the objectives it set, namely multiplying investment, contributing to the emergence of regional economic stakeholders for job creation and encouraging regional economic integration.
The group was set up during the King’s visit to Dakar in May 2015 in a bid to encourage partnership between the two countries’ private sectors and monitor the implementation of private-private and public-private agreements.

During his current official visit to Dakar, King Mohammed VI co-chaired with the Senegalese President several activities, including the signing of several cooperation agreements.

Also, during this visit, the Sovereign added a new milestone to Moroccan-Senegalese relations with the speech he delivered in Senegal’s capital, Dakar, to mark the 41st anniversary of the Green March and in which he highlighted the centuries-old ties between the two countries as well as his keen interest in Africa.

North Africa Post's news desk is composed of journalists and editors, who are constantly working to provide new and accurate stories to NAP readers.
NEWER POSTLibya, “a priority situation” for the ICC in 2017, Bensouda
OLDER POSTTrump’s Victory Casts Cloud on COP22