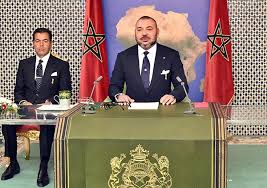 A first in Morocco’s history! King Mohammed VI chose Senegal’s capital Dakar to deliver this November 6 the Green March speech, celebrating the regaining of the Southern provinces from Spanish colonialism.

“By delivering my speech from this hospitable land I am expressing a keen interest in our continent,” said King Mohammed VI in a speech that outlined Morocco’s vision for Africa and for its endeavor to return to its natural place within the African Union.

In his speech, the King expressed recognition to Senegal for its unwavering stand in support of the Kingdom’s territorial integrity, highlighting that the Moroccan and Senegalese peoples “stand as one single people, with each one forming a natural extension of the other, in a unique symbiosis between two independent countries respecting each other’s particularities.”

The Sovereign went on insisting on Morocco’s special ties with Senegal, saying, “Moroccans will not forget the courageous, solidarity-based stance taken by this country when Morocco decided to withdraw from the Organization of African Unity, back in 1984. The then President, Mr. Abdou Diouf, deemed that it was impossible to imagine the Organization without Morocco.”

The same stance was adopted by many African states, such as Guinea, Gabon and former Zaire, the King recalled, before he underscored the special status Senegal enjoys in Africa, “thanks,” he said, “to its historically democratic model, its political and social stability, as well as its economic dynamism.”

In his speech, King Mohammed outlined Morocco’s vision and strategy for Africa, pointing out that this strategy will not be limited to Western and Central Africa but will have a continental scope and will encompass all regions of Africa.

The Sovereign who conceded that Morocco’s relations with East-African countries are limited, explained that this “is not out of neglect or lack of effort, but for objective reasons, such as language, geographic distance and cultural differences.”
“Morocco’s African policy will not be limited to West and Central Africa. I will see to it that it acquires a continental dimension and covers the whole of Africa”, he said, underlining that the very fact to deliver the Green March speech from Dakar mirrors the interest he grants to Africa.

In this regard, King Mohammed VI, keen on sharing with the Moroccan people the results of the recent official visits he paid to Rwanda and Tanzania, underscored the fresh impetus added to Moroccan-African relations by this tour in East Africa that he described as “unprecedented.”

“My visit to Rwanda has enabled us to consolidate this trend, as the foundations for a promising partnership in all fields have been laid in order to build the main pillar on which to develop our relations with the region,” said the King, adding that his trip to Tanzania “was prompted by its status in the region, its geographic location and its human potential. I was also keen to coordinate with this country regarding regional and international issues.”

In the same vein, the King said that a new chapter will be opened with the Republic of Ethiopia, which will be the first stop in a second part of his African tour that will take him to several Sub-Saharan countries in connection with Morocco’s return to the African Union.

In this respect, King Mohammed VI said that Morocco’s return to its natural place within the African institutional family is a “legitimate right.”

“Morocco’s return to the African Union is not a tactical decision, nor is it motivated by passing considerations. It is a rational decision, taken after careful thought,” he said, adding that “In any case, Morocco is returning to its natural place and is supported by an overwhelming majority to reclaim its seat within the African institutional family.”

Morocco’s return to the continental organization will enable it to help make Africa’s voice heard in international forums, he underscored.

The King also expressed Morocco’s readiness to contribute to tackling illegal migration through a human solidarity-based approach which upholds migrants’ rights and preserves their dignity.

North Africa Post's news desk is composed of journalists and editors, who are constantly working to provide new and accurate stories to NAP readers.
NEWER POSTBy Returning to AU, Morocco Will not Compromise on its Territorial Integrity, King Says
OLDER POSTA Royal Speech Addressed to Moroccans… from Dakar, a Première