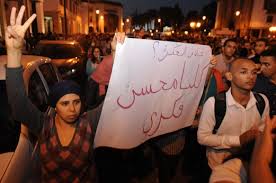 The protests that have sparked in several Moroccan cities following the tragic death of a fish seller in Al Hoceima are reflective of the maturity of Morocco’s civil society, which remains attached to civic virtues and vigilant in keeping with the main issues facing the Moroccan citizens and the challenges of the promotion of the rule of law in the country.

Mouhcine Fikri, 31, who lost his life last week crushed in a trash truck, was the linchpin of protests calling for justice to be made and denouncing the abuse of power by some local authorities.

Right after the incident, King Mohammed VI ordered a thorough investigation to bring those responsible for this horrendous act before justice.

Several western news outlets rushed to describe the protest as a reproduction of the events that triggered the Arab Spring in Tunisia in 2011, with some analysts who ignore the Moroccan reality going as far as forecasting a Syrian or Libyan-like scenario in the Kingdom. These speculations are indicative of a hasty analysis lacking objective insight.

This erroneous analysis was turned down by other experts knowledgeable of the Arab world, like political pundit Jean-Noel Ferrie. He actually pointed out in a column published in newspaper “Le Parisien” that the Moroccans’ reaction to the death of Mouhcine Fikri “is rather an indicator of a healthy society.” For him, it is “foolish to assume that the country is in a state of pre-crisis, similar to that experienced by Tunisia in 2011.” There is no possible comparison with the Arab Spring, the columnist insisted.

Long before the Arab Spring, protests are common place in Morocco, unlike in other countries in the region, including Libya, Algeria, Tunisia and Egypt where the ruling regimes implemented harsh authoritarian measures and emergency laws banning protests.

Peaceful protests and sit-ins were and are a usual phenomenon in the Moroccan society. The Kingdom’s authorities used to let contention be diffused through peaceful protests.

As outlined by Sarah Yerkes in a story posted on Brookings.edu under the title “Why Morocco’s protests won’t usher in another Arab Spring”, Morocco was also able to control the size and scope of the uprisings due, in part, to its tradition of protests. She underscored that “the Moroccan police have not interfered in the protests, and the government has so far made all the right moves to prevent the protests from turning violent or spiraling out of control.”

She also recalled that “the king ordered a thorough investigation into Fikri’s death and sent the Interior Minister to deliver his personal condolences to Fikri’s family.” Interior Minister Mohamed Hassad even issued a statement expressing solidarity with the protesters, “No one had the right to treat [Fikri] like this…We cannot accept officials acting in haste, anger, or in conditions that do not respect people’s rights,” she went on saying.

Another distinctive feature of Morocco’s mass popular protests is that they target corruption and social woes but never the monarchy which is the backbone of the centuries-old Moroccan state.

In this respect, Sarah Yerkes wrote that King Mohammed managed to stay above the fray during each wave of protests due… “to the innate legitimacy afforded him by his dual position as head of state and religious leader (emir al-mu’minun or commander of the faithful).”

Therefore, it is very pertinent to explain the current protests in Morocco within a context in which taking to the street is a normal action guaranteed by the constitution. Instead of being superficially interpreted as a sign of a crack in the Moroccan edifice, the protests rather show the strength, vigilance and maturity of the civil society which moves to safeguard democratic achievements against any backtracking.

As for Mohsine’s gruesome death, the general prosecutor has ordered the preventive detention of 8 individuals out of 11 people charged in this case.

The fish seller was killed when he jumped in the trash truck to save his swordfish, confiscated by the police in the northern city of Al Hoceima.