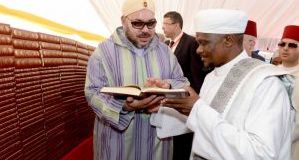 Morocco and Tanzania signed a cooperation agreement to reinforce religious training and spreading the values of moderation and tolerance of Islam.

The agreement was signed on the occasion of the launch by the Moroccan monarch, who was on a three-day visit to Tanzania, of the construction works for a mosque in Dar es Salam.

The 7,400 square meter mosque, will accommodate more than 5000 worshipers and will house a library and a conference hall as well as offices.

On this occasion, King Mohammed VI offered 10,000 copies of the Holy Quran to the National Muslim Council of Tanzania.

The mosque adds another dimension to Morocco’s relations with Tanzania and with this part of Africa. Besides sharing expertise in the economic and development areas, Morocco is willing to expand its tolerant religious model in the continent to counter the calls for extremism and benefit African countries from the Moroccan experience in restructuring the religious field.

In a bid to reinforce religious ties with African countries, Morocco established a Foundation for African Muslim Scholars as a venue for cooperation, exchange of experiences between the Ulema of Africa with a view to championing the true image of the pristine Islamic faith.

The Fez-based Foundation is also created to disseminate enlightened religious precepts and to combat extremism, reclusiveness and terrorism.