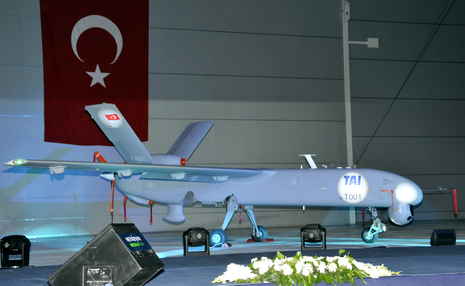 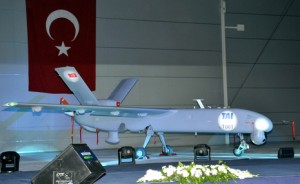 Egypt has purchased ten Turkish-made ANKA drones after months of secret negotiations between the two countries before reaching deal, first of its kind after the fall of former President Hosni Mubarak in a popular uprising in 2011.
With a 56-foot wingspan, the unmanned aerial vehicle (UAV) has the ability to fly 24 hours at a speed of 75 knots per hour and reaching an altitude of 30,000 feet.  According to some military experts, these advanced drones, supplied for undisclosed amount of money, will boost Egypt surveillance and reconnaissance capabilities. The Egyptian Muslim Brotherhood-led government is also expected to order ANKA-B and Armed ANKA-TP UAV’s as well as UMTAS and Cirit missiles.
The Turkish drone has several advantages in comparison with Israeli UAS Heron which can lift no more than 185 kilograms of payload to the height of 30,000 feet, while ANKA can carry over 200 kilograms.
After suspending its military cooperation with Israel, Turkey, a rising regional power in a tumultuous Middle east, has made a strategic decision to ground its Israeli UAVs and produce its own pilotless patrol planes.
And following the government’s node to this project, Turkish Aerospace Industries (TAI) promptly designed and produced a home-grown Turkish UAV dubbed the Anka, which the government hopes will meet Turkey’s needs for UAVs, develop an industry around the craft and sell it to neighboring thriving market.
Drones have become increasingly crucial in fighting terrorism throughout the world. They are widely used by the CIA and the Pentagon, Israel, Iran and other regional powers. They have proven highly effective against Al Qaeda. The remotely piloted planes are used to transmit live video and carry out air strikes without the risking the lives of soldiers.
The Pentagon now has about 7,000 aerial drones, compared with fewer than 50 a decade ago, and asked Congress for nearly $5 billion for drones in the 2012 budget.