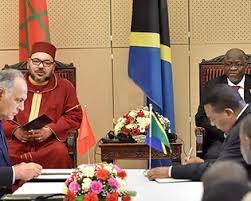 Morocco, Tanzania Give Economic Substance to their Bilateral Cooperation

A new chapter has been opened in Moroccan-Tanzanian bilateral relations with the signing of 22 cooperation agreements, which set foundation for win-win partnerships in the fields of economy, finance, renewable energy, agriculture, fisheries, air transport, hydrocarbons, mines as well as science and culture.

The agreements were signed at a ceremony chaired by King Mohammed VI and Tanzania’s President John Pombe Magufuli as part of a Royal visit to Dar es Salam, the second leg in an eastern African tour which previously took the King to Rwanda. Ethiopia will be the final stop of the tour.

Through this diplomatic offensive, Morocco shows willingness to share its expertise with Tanzania particularly in the fields of agriculture, tourism and renewable energy with a special focus on creating industrial clusters and developing logistics and ports.

These agreements offer a platform for developing a legal framework governing cooperation between the two countries, which have ushered a new era of bilateral relations based on win-win partnerships, the transfer of know-how and expertise and African solidarity.

Through concrete partnerships with key eastern African countries with a promising economic potential such as Tanzania, Morocco is forging ahead with its endeavor to regain its natural place in the African institutional family, the African Union.

The Royal visit to Tanzania also adds substance to Morocco’s foreign policy towards Africa, which is underpinned by the principles of co-development and solidarity that is in line with the King’s vision.

“Morocco’s African policy is based on a comprehensive, integrated and inclusive approach designed to promote peace and stability, encourage sustainable human development and safeguard the cultural and spiritual identity of our populations, while respecting the universal values of human rights,” said King Mohammed VI in an address to the participants in the Crans Montana Forum held in Dakhla on March 12-14.

The visit to Rwanda and Tanzania and later to Ethiopia will add momentum to Morocco’s diplomatic offensive to return to the African Union which it has left on grounds of lack of neutrality in 1984 when the pan-African organization accepted the membership of the Algeria-based separatist entity, SADR.