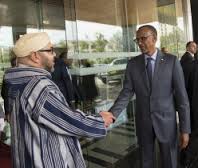 Tanzania, where King Mohammed VI is expected on Sunday afternoon, is the second leg in his tour in eastern Africa, a tour that mirrors Morocco’s steadfast determination to build on economic diplomacy in order to foster political ties with English speaking African countries.

The delegation accompanying King Mohammed VI is made up of senior King Advisors, ministers and CEO of government and private sector companies as well as leading businessmen, a composition that is in line with Morocco’s comprehensive approach to reinvigorate its Africa’s foreign policy on the basis of co-development and solidarity.

At the political level, the King appointed former Ambassador to Nairobi, Abdelilah Benryane, new ambassador to Tanzania as part of a larger reshuffle of Morocco’s diplomatic representations in Africa with the appointment of several ambassadors in countries in which Morocco was diplomatically absent for decades.

The reinvigoration of Morocco’s diplomacy in Africa was carried out in tandem with Morocco’s submission of an official request to regain its natural place in Africa’s institutional family, a move that was met with satisfaction by Tanzania’s Foreign Minister who welcomed Morocco’s bid to return to the African Union.

On the eve of the sovereign’s visit to Tanzania, Dar es-Salam hosted the first edition of the Moroccan-Tanzanian Forum on Trade and Investment.

During his visit to Tanzania, the Moroccan Monarch will hold talks with the Tanzanian President John Magufuli as well as with the President of the semi-autonomous archipelago of Zanzibar Ali Mohamed Shein.

As was the case with the visit to Rwanda, the King’s trip to Tanzania will wrap up with the signing of several cooperation agreements in the fields of finance, agriculture, tourism, training and investments.

Tanzania, with its 50 million inhabitants, offers tremendous opportunities to Moroccan investors. Being the most stable country in Eastern Africa, Tanzania has a propitious investment climate. Its GDP rate jumped from 17 billion in 2005 to 46.20 billion dollars in 2015. Tanzania’s membership in the Eastern African Community will also open a market of 140 million inhabitants to Moroccan companies.

Morocco could also share with Tanzania its expertise in terms of electrification, as only 20% of Tanzania has access to electricity. The Green Morocco Plan which helped the Kingdom boost agricultural output is also on top of the agenda along with measures to promote and develop the tourist industry.

Through this visit, Morocco evidences its commitment to reach out to African countries through concrete economic cooperation underpinned by solidarity in tandem with its efforts to join the African Union and contribute to the development of the continent.