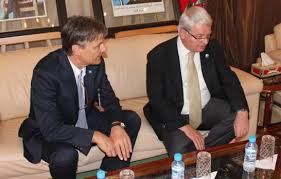 After Rabat, the UN Under-Secretary-General for Peacekeeping Operations Hervé Ladsous flew to the southern city of Laayoune where he will meet local authorities and visit the headquarters of the UN mission in the Sahara, MINURSO.

In Rabat, Ladsous held talks with Charki Drais, Minister Delegate to the Interior. Talks focused on the security conditions in the southern provinces, notably on the borders with Mauritania as well as in the Sahel region in light of the surge in terrorist threats, Moroccan local media said.

Drais highlighted during the talks the efforts led by Morocco to promote stability and peace in the Maghreb and the Sahel despite the provocations and attempts to destabilize the region.

This represents a first visit by the UN peacekeeping operations chief since the crisis that broke out between Morocco and the MINURSO on grounds of the controversial visit of the UN Secretary General to the Tindouf camps last March. Ban Ki-moon had then described Morocco’s retrieval of its southern provinces as an “occupation”, thus violating neutrality and sidelining with the separatist thesis.

In addition to Ban Ki-moon verbal blunders, MINURSO has accumulated deviations from its main cease-fire monitoring mission leading Morocco to expel the civilian component of the UN mission from the Sahara. Following negotiations, the Kingdom accepted back 75 civilian MINURSO staffers.

Last August, the UN announced that Christopher Ross is ready for a visit to the region in order to relaunch the negotiation process. This trip is still being examined, said the UN spokesperson, Stephan Dujarric.

For his part, Ban Ki-moon is expected in Marrakech to attend the Climate summit, COP22, slated for November 7-18.